The 52-year-old singer spent a short spell in Cook County Jail in March for failing to pay more than US$161,000 in child support to his ex-wife Andrea Lee, and after having given her a cheque for US$62,000 last month, he's now paid another US$32,000, according to his lawyer.

Steven Greenberg has told TMZ that Kelly doesn't owe one more single solitary cent" of this month's payment, and won't need to pay anything more to Andrea until July's lower payment of US$21,000 is due.

The Ignition hitmaker first made a payment to Andrea last month at a hearing in Chicago, which was the first in his divorce case with Andrea to be held in public since 2013, after a judge previously sealed the proceedings. 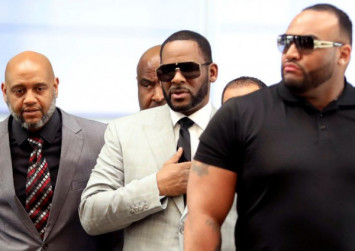 Kelly and Andrea's case was brought back to the public eye after Cook County Judge Lori Rosen ruled in favour of Andrea's motion to unseal the case.

Alison Motta, Andrea's lawyer, said at the time of the hearing: "Ms. Kelly appreciates the fact that Mr. Kelly is not going to have any special protection above and beyond what anyone else has.

"[If] he doesn't take his responsibilities seriously, doesn't comply with his obligations to his children, it's gonna get filed and people will know."

The child support payment case comes as the R'n'B star is currently facing multiple allegations of sexual abuse, 11 of which were brought against him earlier this month.

Kelly has entered a plea of not guilty to all 11 new charges, which come after he was previously faced with 10 counts of aggravated criminal sexual abuse when four women accused him of sexually abusing them, three of whom claim they were underage at the time of the alleged incidents.