"She is currently very excited and grateful for another blessing [in the form of her second child]," they continued.

The superstars, who got married in January 2017, welcomed their first child, a girl, in October the same year.

BS company thanked "everyone who has always been showing a great deal of love for Tae-hee," and added that the actress is "focusing on taking care of the baby's well-being." 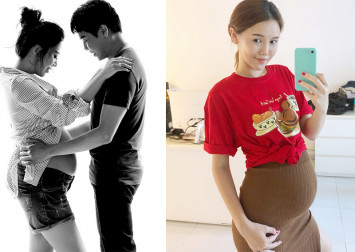 Even with all the blessings and congratulatory messages pouring in, Rain has been keeping mum about Tae-hee's second pregnancy on his social media.

This is probably expected of the 36-year-old star, who has repeatedly mentioned how he wants to keep his public and private life separate.

The singer-actor is exceptionally private about their daughter who has so far been kept away from social media and headlines in general.

Rain revealed his reasons at a recent press conference for an upcoming movie last week (Feb 20), "I think I'm different after having a family. In the past, I spoke about how I want my family to get along in a certain way, but the world is scary now. I want to reveal my baby, but I feel it could come back [and hurt me] later."

He continued, "In the future, I plan to keep a wall between work and family because I don't want my family to be harmed."