Most of us would have learnt in school about what happened in Singapore during World War II, but with the devastating event happening more than a lifetime ago, it could feel too distant to relate.

For Rebecca Lim, starring in the new Channel 5 drama This Land Is Mine — set in 1940s post-war Singapore — meant tapping into childhood memories of the stories her late grandfather shared.

In an interview with AsiaOne during the press event for the show, the 34-year-old actress said she was brought up by her maternal grandparents, and they would pick her and her cousins up from primary school every day to bring them to their home.

They would play Chinese chess together, and while grandpa was usually a man of few words, he would occasionally recount his memories and experiences of the war.

"One of the stories he shared was that he was hit with the barrel of a gun by a Japanese soldier, which caused him to be deaf in one ear. What I learnt from his stories are not only of the misfortunes that happened to Singaporeans and our ancestors at that point in time, but also the victories and the strength they had, which are very inspiring for the people now," Rebecca said.

This Land is Mine shows the difficulties and strength of the locals as they face unemployment, soaring food prices, and social unrest after the war. It stars Pierre Png as Dennis Chiang, a rising associate in the law firm of d'Almeida & d'Almeida; Rebecca as his cousin June, a clerk in the same law firm; and local singer-songwriter Shabir as former war hero Habibullah who lost an arm in battle.

The drama, which also stars Charlie Goh and Sora Ma, will debut on Channel 5 and meWATCH on National Day Aug 9 at 9.30pm.

Rebecca's grandfather also told the young children stories about his family, how he was temporarily separated from them, how he had to survive, the unfortunate passing of his friends and neighbours, and having to scrimp on food.

He talked about the importance of food to the grandchildren, and Rebecca added she has never wasted food because of the values he instilled.

Grandma didn't speak much of the war to the kids as the horrors were probably still raw for her at that time, Rebecca added, although she talked about the racial riots that happened in Malaysia and Indonesia in the 1960s.

That period of time was also when Channel 8 telecast the drama The Price of Peace, set in Japanese-occupied Singapore during World War II, and the grandchildren watched the show together with the grandparents.

"There were quite a number of disturbing images and young kids probably didn't understand them. That was when my grandparents came in to share about their experiences and to put the images into reality," Rebecca said.

"I think the purpose of him sharing was so that we would appreciate what we have now, because it was so not easy for them during war-time."

Read Also
E-Junkies: We visit This Land is Mine's 1940s film sets with Rebecca Lim, Pierre Png, Shabir, Charlie Goh and find out what they'll bring if they time-travel 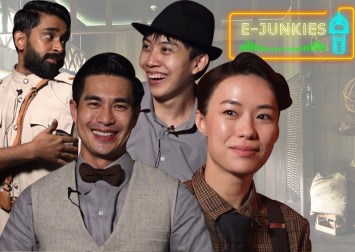 She also explained that her perceptions of that dark period as a child and now are different.

"As a kid, I thought it was interesting, like, they really ate tapioca without sugar and coconut milk like we do now. But now, as I recall the stories my grandfather shared, I'm very grateful that he told us because this is his legacy, and these are stories that I would tell my children and grandchildren so that they will understand everything didn't come easy," said Rebecca.

"Singapore is a strong nation not because it just happened, it is like that because of the sacrifices of so many people. It's definitely something I will pass on to future generations, if I do have a kid, and to my niece. Sometimes, we take peace for granted."