Resident Evil: Infinite Darkness on Netflix feels like a series of cut-scenes compiled into clips, with the gameplay missing

In the realm of Resident Evil, nothing ever stays dead.

Whether it’s a live-action film, reboot or an animated series, we know Capcom will keep bringing them back as the franchise is their longest-running survival horror franchise that has spread its infection across multiple touch point, from video games, comics, movies, and animation, and it is arguably one of the industry’s favourite undead franchises.

With news of the upcoming Netflix live-action series and Resident Evil Village back in 2020, one would’ve imagined Capcom would want to take a break but no, the undead never rests. A few months after those announcements were made, Capcom followed up with more, and announced that they were reuniting two of our favourite protagonists – Leon Kennedy and Claire Redfield – in a four-episode anime, Resident Evil: Infinite Darkness.

Produced by TMS Entertainment, the series is CG animated by Quebico, a slightly obscure animation studio in Tokyo that we can’t seem to find any previous works to date. Premiering exclusively on Netflix, Resident Evil: Infinite Darkness is directed by Eiichiro Hasumi (Umizaru, Assassination Classroom), and sees the return of Nick Apostolides as Kennedy and Stephanie Panisello as Redfield, from the Resident Evil 2 Remake.

Infinite Darkness takes place in between the events of Resident Evil 4 and Resident Evil 5. Sometime after Leon rescued the US President’s daughter, he was ordered to investigate a hacking incident that took place in the White House, and tasked to work alongside two federal agents, Shenmei (Jona Xiao), and Jason (Ray Chase). But before they know it, zombies start appearing out of nowhere and turns the safest place in the entire country into shambles.

Meanwhile, Claire, is on her mission to aid a welfare facility in Penamstan, a country torn by civil war, and ends up discovering something sinister that played a part in the White House attack, and tries to expose the truth behind everything.

While it’s nostalgic to see these two popular characters return, nothing can compensate for the weak narrative the show has to offer.

The premise of the series has quite the potential to kick off an interesting side-story for both the franchise and our favourite zombie-killing couple, but the short season and plot itself lacks the depth to bring out its full potential. Despite sharing similar concepts to many of its adaptations and games, the show falls flat thanks to its dull villains, and the way the story quickly plays out.

As unoriginal as the franchise about an undead virus can be, some of the reveals and antagonists throughout the franchise has made quite an impact on the grand narrative, but for the Tyrant (of course, there is one) or villain of Infinite Darkness, it didn’t seem to make a compelling or surprising entrance.

The Tyrant’s obsession with spreading “terror” is easily the most monotonous motive any villain can have. Additionally, its motive behind certain things was always muddled between his actions and measures, making his intentions a little perplexing. Much of his actions didn’t make sense, and felt rushed for the sake of the ending.

Compared to villains from the previous games, Infinite Darkness’s one would be extraordinarily boring and unconvincing at best.

The other drawback of this series is how short it is. While having more episodes doesn’t necessarily mean it will be better, the pacing for each character and the overarching plot could have benefitted from an improved overall flow and storytelling of Infinite Darkness.

Despite having a more purposeful role, Claire had less airtime here since most of the show  revolves more around Leon, simply because that’s where all the action’s at. Infinite Darkness could have potentially been a great arc for Capcom to explore the relationship between the two leads, but it never does. It would have been nice if both of them shared more screen time but like the games, they don’t.

To our surprise, new characters Shenmei and Jason play an even greater role in these four episodes, and they too could have benefitted from an extended episode count.

The 20-minutes per episode means audiences are constantly rushed into events and there leaves little time to flesh out the plot and explore any themes properly. In the end, Infinite Darkness feels less like an official product and more of poor fan service instead.

If this was a game, it feels like we’ve finished watching a series of cut-scenes compiled into clips, with the in-between gameplay missing.

Oh, and if you’re expecting anything close to horror, prepare to be disappointed, as the show tends to revolve around its drama rather than offering us the suspense, horror, and thrill the way the game does. 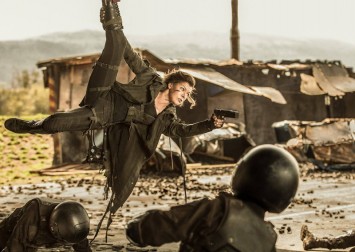 The only uplifting element is hearing Apostolides and Panisello reprise their roles as Leon and Claire. Along with Chase and Xiao, the cast definitely pulled off a great performance but was let down by poor pacing and storytelling.

If you pay close attention to the end of the story, you can spot an easter egg that might or might not lead to a possible sequel, and if it happens, we hope they’d take their time for it.

Funnily enough, a manga-style graphic novel based on this series has been announced for 2022, and while that might offer some form of redemption, we’re not counting on it.

Resident Evil: Infinite Darkness will premiere on July 8 on Netflix.

Resident Evil: Infinite Darkness had the potential to be a wonderful start for Capcom’s venture into an anime series but it failed to capture the essence of good storytelling no thanks to its uncompelling villain and rushed narrative.