Review: Artistic film Notre-Dame On Fire is made for a niche crowd

When Notre-Dame de Paris caught fire in 2019, Parisians wept. The iconic cathedral, rich in history and fame, has stood firm for over 800 years and believers from all over the world flocked to the historical site to pray, whilst tourists noted it as a must-visit location when admiring and taking in the sights of Paris.

And while it’s only been a mere three years since the tragedy, French director Jean-Jacques Annaud has decided to make a movie out of it.

The disaster film’s title, Notre-Dame on Fire, tells you all you need to know about what the film is about, and seeing how the fire itself was extensively reported in the news internationally, Annaud’s film provides a new lens into the well-known and documented tragedy.

Based on real interviews and anecdotes given by firefighters and police officers on duty during the day Notre-Dame caught fire, Notre-Dame on Fire is a dramatic retelling of the incident in various means. It’s a whodunit, it’s a detective tale and it’s also a disaster movie.

The movie starts by hinting how the fire must’ve started — a stray cigarette a construction employee didn’t put out properly — but since the cause of the fire was never really uncovered, revealed or pinpointed, Annaud provides other possibilities too. 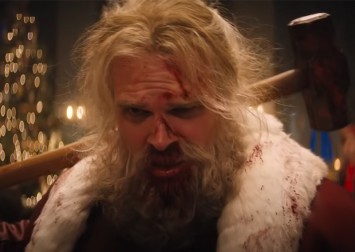 From there, Notre-Dame on Fire zeroes in on the often haphazard but ultimately heroic response to the unfolding disaster. Paris traffic, sluggish response times, locked doors and the struggle to get firefighting equipment up medieval spiral staircases all ramp up the tension in the middle portion of the film.

By the end of the film, you still won’t know what really started the fire, l but you will leave the theater with a greater appreciation for firefighters who often risk their lives to save the day.

Starring Élodie Navarre, Chloé Jouannet, Jesuthasan Antonythasan, Kevin Garnichat, Samuel Labarthe, Jeremie Laheurte, Maximilien Seweryn, Daniel Horn, Vassili Schneider, and Sebastien Lalanne, Notre-Dame on Fire has quite a number of known French-Swiss actors in the region though in some bizarre retelling of events, these actors come off across as awkward or rather unprofessional in their performance, though that’s likely to keep the realness of the film.

Annaud leans into the cast of characters of weary firefighters, panicked church wardens and emotionally stricken priests, to tell his story, while the Parisian public aid in providing a vivid backdrop with their reactions to the fire. The archival news footage as well as personal videos caught by onlookers supplement the tale — oftentimes through the use of split screens.

The juxtaposition of real footage with the film via split screens does take away some of the elegance in Annaud’s cinematography, but it also comes across as a necessity in grounding the film in facts and evidence, rather than fiction and over-dramatisation.

The Seven Years in Tibet and The Name of the Rose director has always had an affinity for faith and religions, so it should come to no surprise that Notre-Dame on Fire is riddled with religious motifs, as a young girl’s death-wish to light a candle in the cathedral as it falls apart; loud bells and melodic and repetitive vocalisations, along with the visualisation of Christ brought to screen multiple times — either in dialogue or symbols, pepper the screen. 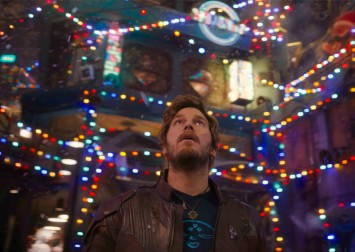 That said, there isn’t much dialogue in the movie. Much of the audio one gets is from the sound of flames crackling, parts of the cathedral crashing onto the floor and the heroes coughing as they try to not suffocate and be engulfed by the flames too.

The dialogue we do get from time to time are of the authorities discussing their plans, most of which are raised voices and murmurs in French, and funny one-liner remarks from onlookers to inject a little bit of life and humour in the otherwise serious film. There is also a comical exchange between an old lady and a firefighter, over a cat stuck in a tree as the cathedral lights up in flames in the background.

But otherwise, Notre-Dame on Fire is a visual experience as the film’s greatest strength lies in its ability to capture the daunting rage of the fire. Annaud combines muscular action sequences with actual footage of the event to scorching effect, and if you need any more convincing, the director actually created real large fires on set whilst filming.

Everything looks and feels real because it is! There’s a sense of worry and panic that transmits through the screen, adding to the experience.

In some ways, Notre-Dame feels like a woman personified. She is in grave danger and in need of help as the firefighters, her knights in shining armour, come to her rescue. Notre-Dame on Fire is made for the big screen experience, with its full effects and gravitas something that can only be felt when watched on the big screen, and but we can’t promise the same effect if one were to watch it on the small screen.

Notre-Dame on Fire is far from your Hollywood disaster films. It’s not The Impossible or Deepwater Horizon. It’s — and we’re aware of how pretentious this sounds — art. It wasn’t made for entertainment purposes, like 127 Hours, where casual moviegoers will catch anyways because it stars James Franco.

It’s also not for fans of the disaster genre who live for the thrill and danger. The film is definitely made for a niche crowd, likely the French and fans of indie, artistic films and may not be of much interest to the general public.

Whilst the film may fizzle when it comes to wide appeal, there’s no denying that Notre-Dame on Fire will cause a raging fire for those it is intended for.

Notre-Dame on Fire opens in IMAX and theatres on Dec 8.

The Notre-Dame fire gets a pulpy retelling by Jean-Jaques Annaud. An artistic film, Notre-Dame on Fire may lack in general appeal and is only worth catching on the big screen.