It's no secret that local actor Romeo Tan was a chubby kid.

And like most chubby kids, he was the victim of bullying. While the 36-year-old has mentioned this briefly back in 2015, he went into more details on the latest episode of the meWATCH talk show Hear U Out.

Romeo mentioned to host Quan Yi Fong that he was often mocked and teased because of his weight. He recalled: "Someone squeezed correction fluid on my chair. When you sat on it, it would leave a white stain on your trousers. They would play such a prank on me or shoot a rubber band at me."

One incident which left him scared and angry was when a fellow student shoved him and caused him to fall from a bicycle. To make things worse, the bully dipped his foot in drainage water and smeared it across Romeo's thigh.

The actor didn't retaliate then and just kept quiet and waited till the bully left before he returned home.

When Yi Fong asked why he didn't do anything, Romeo replied: "I couldn't tell what he'd do next. I know it was wrong. I just didn't have the guts to confront him."

It wasn't just his peers who were mean.

His teacher even once remarked "I've never seen such a fat Romeo before" in front of his class. Another time, he was playing a game of cops and robbers with some friends and a bunch of them ran into the lift which broke down.

Read Also
Romeo Tan shares photo of chubby self, encourages people to find their own path in life 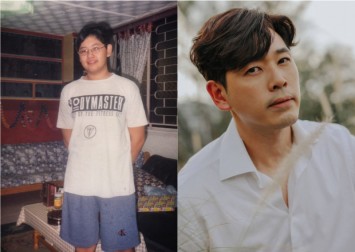 The turning point came when a Physical Education teacher commented that Romeo and his friend (who was also a chubby kid) would fail their National Physical Fitness Award (NAPFA) test.

In order to prove a point, the two of them made a pact to pass their 2.4km run, which they eventually did.

From that point on, the two of them embarked on a weight loss journey and Romeo shed 20kg in three years. That was the first time he felt encouraged and that people looked at him differently.

He said: "I'm a slow learner. I tend to be slow on the uptake. I was in Secondary 4 when I finally realised I must address my weight problem."

Romeo added: "It also made me realise how superficial people are. After I slimmed down, I had more friends. Women would come and talk to me. Women would [ask] 'be my steady'. They wanted to date me."

Despite recognising that the world was a cruel and superficial place, Romeo didn't feel the urge to seek vengeance against it for what he had been through.

"[The world is] something I can't change. This is my life. I can only make the best of it," he explained.