Romeo Tan offended a director, made to stay on set despite not having any scenes

Local actor Romeo Tan has made his mark in local showbiz but before that, he ran afoul of directors — for some reason.

On the latest episode of the meWATCH talk show Hear U Out, Romeo, 36, spoke about his past as an extra and how he was treated by directors.

He said: "Some directors were more hot-tempered, they were probably pressed for time. Or I was clueless about positioning, lighting and camera shots so I would NG or fumble my lines. I'd get scolded for all that.

"I felt abused for a day's work that paid only $80 to $100. They were really fierce. At that time, I had also matured. I was no longer a fat boy who was immune to humiliation. My pride would be bruised by their cutting remarks."

Of course, things changed a little once he finished fourth in Star Search 2010 and signed on with Mediacorp.

Compared to being "severely scolded" as an extra, he was still berated as an actor although people did show him more respect, he said.

That said, there were still directors who got so angry at him that they tossed scripts and said: "Stop filming! You can't act!". These left him mortified.

There was one instance when he was filming a period drama and the director pointed out that he was speaking his lines too slowly. 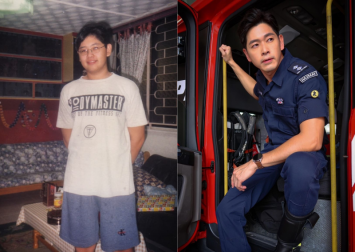 Romeo recounted: "So I asked how fast I had to speak. I did a 'demo' to verify the speed. The director asked where I was from. I replied 'Star Search' and he acknowledged.

"Then I finished filming my scenes — the crew would normally say you may leave after that but they didn't say anything. I waited backstage until they called for a wrap. That was a signal that I could leave."

At that point, Romeo realised he must have offended the director.

When host Quan Yi Fong asked if he knew what mistake he had committed, the actor replied: "Maybe I didn't show enough sensitivity in my replies. He probably felt I was talking back to him."

ALSO READ: Romeo Tan had to lie on top of Denise Camillia Tan for 4 hours while filming new drama