SINGAPORE - Director Jack Neo has unveiled the cast of his upcoming movie, Ah Girls Go Army, after an online audition which attracted thousands of hopefuls.

In a Facebook live stream last Saturday night (Oct 23), Neo revealed the 14 fresh faces who will join actress Apple Chan, 32, who appeared in Ah Boys To Men 4 (2017) and will reprise her role as Lieutenant Zhang.

The female cast will include Xixi Lim, 33, an actress who has appeared in local dramas and movies, as an overweight and lazy recruit.

Another new recruit is influencer Samantha Tan, 27, who was recently drawn into the scandal involving Night Owl Cinematics, when its co-founder Sylvia Chan allegedly used vulgar language on her in leaked messages. 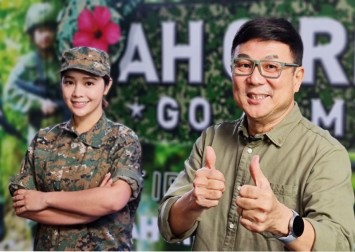 Others in the movie, slated for release on Chinese New Year next year, include ex-model Shirli Ling, actress-host Farah Farook and Miss Vasantham finalist Eswari Gunasagar.

Mediacorp actor Glenn Yong, 25, was also unveiled as the thorn among the roses, as he takes on the role of a platoon sergeant.

Other cast members from the successful Ah Boys To Men comedy film series (2012 to 2017) are expected to have cameos.

All directed by Neo, 61, the four movies had grossed more than $26.8 million in theatres.

Turning to women this time, the new movie will focus on a batch of female recruits, who are Gen Z teenagers with different socio-economic backgrounds, undergoing Basic Military Training.