Scared of Mink in Thai horror film The Medium? So was the actress herself

Thai actress Narilya Gulmongkolpech in a photo from her Instagram (left) and in a movie still from The Medium.

If you enjoy a good chill down your spine, you probably would have watched The Medium in the cinemas already.

The Thai horror film, directed by Shutter filmmaker Banjong Pisanthanakun and showing in theatres now, has created a new scary female character to haunt your loneliest and darkest moments — Mink.

She starts off as a super cute and bubbly young woman but quickly morphs into something (yes, not 'someone') that makes your blood curdle.

Don't be ashamed to be scared though, cos even the actress herself is afraid of Mink.

Thai actress Narilya Gulmongkolpech said in an interview that she was scared just looking at herself after the make-up team was done with her.

In an email interview with AsiaOne, the 21-year-old elaborated: "This fear occurred only when I was not in the scene and not in character. But once I was playing Mink, the makeup really got me into character."

She added: "I personally believe that spirits exist, so I was quite afraid of the filming location because I felt it was a bit scary. However, it was a really fun production with the crew and the actors, so it wasn't stressful or something that I worried about."

The Medium opens with a documentary film crew following Nim (Sawanee Utoomma), a shaman based in the Isan area in northern Thailand, to record her experiences. They encounter her niece Mink showing strange symptoms that seem to be of shamanism.

The team decides to follow Mink, hoping to capture the shaman lineage passing on to the next generation, but her bizarre behaviour becomes more extreme. Gradually, the crew as well as Nim and her family realise that what could be possessing Mink might not be the goddess they think. 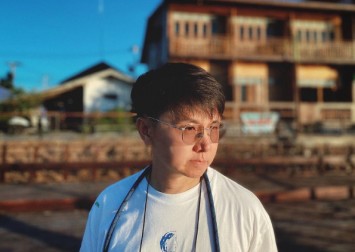 In the movie, Mink becomes gaunt as the haunting intensifies. Narilya shared that she lost weight to reflect the physical changes in Mink.

She said she first gained four to five kg by having bigger meals together with small meals during the day.

Subsequently, in order to lose 10kg for the role, she worked closely with nutritionists who regularly monitored her food and nutrition.

"Mentally, I received guidance from a specialist, including good care from the director, production crew, and all the actors, which allowed me to focus on my character," she added.

When asked if she's grown more scared of the supernatural after filming The Medium, Narilya replied: "Some parts of the movie are based on true stories, and in addition, I've heard these types of stories since I was young, so I have been quite scared. Even though we've finished filming the movie, the feelings and beliefs are still there. But I understand [better now] the reasons and causes of all the things I had heard."