'Scolding is a sign of love': Jeff Wang reprimanded son so loudly the neighbourhood could hear it

Jeff Wang is adapting his parenting methods according to his son's growth.

The former Mediacorp actor revealed that his neighbourhood could hear him when he admonished his son, Lianhe Zaobao reported yesterday (Aug 21).

"When I get angry, those living above and below me could hear me [scold my son]," Jeff, who is now based in Taiwan, said.

"In our community group chat, someone even said, 'I think I heard something'. Truth be told, what they heard was me."

The 45-year-old was in Singapore for two weeks to renew his permanent residency. He also spent time visiting friends and explored the possibility of bringing Taiwanese F&B businesses to Singapore.

Jeff's 14-year-old son, whom he has with his Singaporean ex-wife, arrived here earlier for a longer holiday.

This single father's way of teaching his son, only known to the public as Qi, used to be traditional and strict.

After an instance where he spanked his son so hard that he left an imprint on the boy's buttocks, Jeff stopped physical punishments. 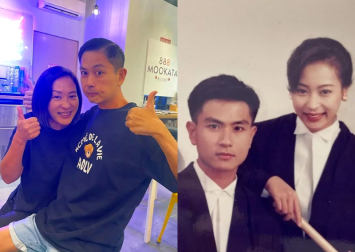 Explained Jeff: "After some time, I began to use my words [instead of beating him], scolding him harshly. But after giving it some thought, I toned down the scolding. If I kept scolding him so harshly, he would be overwhelmed."

As his son grows, Jeff must readjust his parenting methods and how he educates his son. However, he maintains his stance on being strict.

Aside from general parenting, Jeff has also been active in teaching his son about the birds and the bees.

"I have already talked to him about sex education and he isn't uncomfortable with the topic. I taught him in a cordial and humorous manner."

Jeff also adds that caring for his son is one of the three goals he has at this stage in life. The other two are doing his job well and improving himself.

Explaining that the last point was crucial, Jeff said that he needed to be happy and lead a fulfilling life to ensure that he lives with motivation, joy and spirit.

The change of his Mandarin name was also a part of that, Jeff admitted. Describing it as "assistance" towards his goal, Jeff said that the majority of things in life are unsatisfactory — what matters instead is your perspective towards them.

"So far, I feel very happy and satisfied."

ALSO READ: 10 facts about Singaporean actress Eelyn Kok that you might not know