Writer-director Yeo Siew Hua with the Golden Leopard for A Land Imagined.

It is the first Singapore film to win the top prize at the annual festival, held in Switzerland from Aug 1 to 11 this year. A total of 293 films from around the world were shown. Stars who graced the event included American actors Ethan Hawke and Meg Ryan.

The movie also clinched the first prize of the festival's Junior Jury Awards (by young film fans for the best director), as well as a Special Mention from the Ecumenical Jury (for "sensitising the viewer to religious, people-related, and social values").

Its lead actress, Luna Kwok, was also presented with the Boccalino d'Oro Prize for best actress.

Read Also
'Asian August' comes to Hollywood, but will it last? 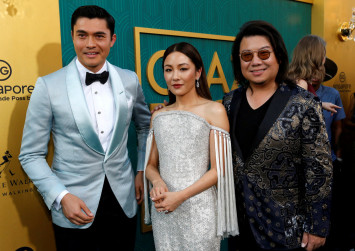 The thriller stars Peter Yu as police investigator Lok, who must find a migrant worker Wang (Liu Xiaoyi), after he suffers a worksite accident then mysteriously disappears.

The film moves between the virtual world and reality, as Wang frequents a cybercafe and forms a virtual friendship with a mysterious gamer that takes a sinister turn.

Said director Yeo in a video interview posted on the Locarno Festival's YouTube page: "I am quite speechless, I was only just given this and told by the festival director that we won the Golden Leopard, and I am overjoyed.

"I would not have imagined to be even competing in a legendary festival like Locarno, and winning this award is something of my wildest dreams."

Plans for the worldwide release of the movie, a Singapore-France-Netherlands co-production, is in the works.

Said Ng Say Yong, Chief Content Officer of Singapore film production and distribution company mm2 Entertainment: "We'll like to congratulate director Yeo Siew Hua for making Singapore film history by being the first Singaporean to win the top award at the Locarno International Film Festival. This goes to show that our local talent have what it takes to make it in the highly competitive international film circuit, and mm2 will continue to support them to make films that do us proud."

According to the Infocomm Media Development Authority (IMDA) website, Mr Yeo graduated among the top of his cohort in Ngee Ann Polytechnic's School of Media Studies. He wrote and directed short films such as Aik Khoon (in competition for the Silver Screen Awards - Singapore International Film Festival 2005) and Waking Monkey (The Substation's Best Film Award for the Best of First Takes 2007).

His debut feature film in 2009, In The House Of Straw, was lauded by critics as a significant film of the Singapore New Wave.