After spending decades abroad in Hong Kong, could there be a homecoming for Singaporean actor Hugo Ng?

Speaking to Lianhe Wanbao recently, the 60-year-old actor confessed that if he were to be shopping for a property, he has his eye on Singapore because "my son likes it here".

He told the Chinese daily that his son, 23-year-old Justin, is in Singapore studying special effects in filmmaking after completing his National Service. "He likes Singapore and I think he's quite suited to live here. So if I'm going to buy a property, I'll consider Singapore."

Hugo, who is semi-retired, added he rents an 800 square feet apartment for his son here and the size is a fraction of his place in Penang. However, the rent is almost the same, leading him to conclude that there's more profit to be made if he invests in a property here.

The veteran actor was a former Channel 8 star in the 80s and became a household name in the 1984 Singapore Broadcasting Corporation (the first iteration of Mediacorp) period drama Pursuit.

He then ventured into Hong Kong showbiz in 1987, where he signed on with TVB and acted alongside actor Tony Leung Chiu-wai in the 1988 wuxia drama The Two Most Honorable Knights. But in 2016, he made a comeback to Singapore where he played a leading man in Channel 8 drama The Dream Job.

It was reported that Hugo and his wife, former actress Lily Chung, were shopping for a property in Southeast Asia three years ago before renting his current place in Penang. He told China Press: "We had been to Johor Bahru, Sabah, and Kuala Lumpur, and seen lots of houses. We saw more than 20 in Penang before deciding to rent a 4,000 square feet apartment in Tanjung Bungah."

Both Hugo and Lily, 47, have moved more than 30 times since getting married. Apart from Hong Kong, they have also lived in China, Kuala Lumpur, and Singapore, and even bought a property in Thailand. He has since sold his property in Hong Kong. 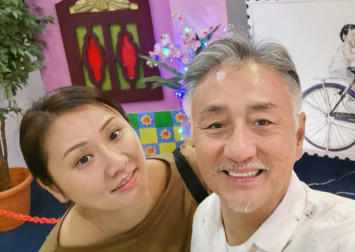 Hugo was also full of praise for his son as the latter becomes more independent the older he gets.

"My son is thrifty, and because I don't have a stable income, he is also the recipient of a bursary. Sometimes he'll text and tell me what he ate, and he's very pleased to have a meal for less than $2. This makes his mother very worried. I think it's okay, after all, why do you need to eat so much for?" he laughed.

According to Wanbao, Hugo had a slight cough during the interview and despite the looming shadow of the Wuhan coronavirus, the actor remained calm, and said he tries to avoid crowded areas. He also wasn't worried that his upcoming drama, which will have its lensing ceremony next month, might be postponed due to the outbreak because "it's good to have more time to rest".

In his upcoming project, which is a sequel to the Hong Kong series Who Wants a Baby, he plays actor Kenneth Ma's father.

Well, it remains to be seen if Hugo will make good on his words and return to the motherland. After all, he previously said he would stay in Penang for a year to see if things work out.

He has even described his current place as his dream home.