NEW YORK - Federal prosecutors on Friday (July 12) charged Grammy Award-winning singer R. Kelly with kidnapping women and girls for sex, forcibly keeping them under his control over the past 20 years and buying their silence when they tried to go public.

In indictments unsealed in Brooklyn and Chicago, prosecutors portrayed a racketeering and human trafficking scheme run by Kelly, 52, and his employees that laid down strict rules requiring his sexual partners to be obedient and to call him "Daddy."

"The purposes of the enterprise were to promote R. Kelly's music and the R. Kelly brand and to recruit women and girls to engage in illegal sexual activity with Kelly," the Brooklyn indictment said.

The R&B singer, who already faces state sexual assault charges in Illinois, was arrested by New York City detectives and federal agents as he walked his dog in Chicago on Thursday evening, his attorney, his lawyer, Steve Greenberg, said.

He was set to appear before a federal magistrate in Chicago later on Friday.

His arraignment in Chicago was set for Tuesday.

Brooklyn prosecutors urged in a court filing that Kelly be kept in jail pending his transfer to New York for a hearing that has yet to be scheduled.

Greenberg said the federal charges appear to be "largely the same" as state sex assault charges Kelly currently faces and child pornography charges for which he was acquitted in 2008.

"Most, if not all of the conduct alleged, is decades old,"Greenberg wrote in a statement posted on Twitter shortly before the indictments were unsealed.

"He and his lawyers look forward to his day in court, to the truth coming out and to his vindication from what has been an unprecedented assault by others for their own personal gain," he said.

The five-count Brooklyn racketeering charge includes multiple allegations going back to 1999, including sexual exploitation of a child, kidnapping and forced labour.

Under the alleged scheme, Kelly and his entourage would invite women and girls backstage after concerts, isolate them from friends and family, and make them dependent on him for their financial well-being.

Chicago prosecutors alleged in their 13-count indictment that Kelly had sexual contact with five minors, recorded videos of some of them and paid them off to buy their silence. 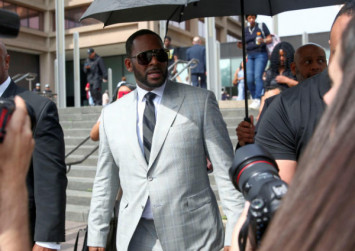 In one case, prosecutors said Kelly paid an unidentified person US$170,000 (S$230,000) to cancel a news conference in which the person had planned to announce he had tapes of Kelly engaging in sexual activity with minors.

Kelly "used physical abuse, violence, threats of violence, blackmail and other controlling behaviors against victims so that Kelly could maintain control over them, prevent them from providing evidence to law enforcement, and persuade them to continue to abide by prior false statements," it said.

McDavid, who surrendered voluntarily to authorities, appeared briefly at a hearing in US District Court in Chicago on Friday to hear the four charges he faces.

Last month, Kelly pleaded not guilty to 11 new state felony counts of sexual assault and abuse at a Cook County, Illinois, court hearing, after prosecutors expanded an indictment against him.

He has vehemently denied abuse allegations for decades.

The Cook County charges involve alleged abuse of a victim between the ages of 13 and 16 that prosecutors said took place between May 2009 and January 2010. In February, Kelly pleaded not guilty to charges that he sexually assaulted three teenage girls and a fourth woman.

The singer, known for such hits as I Believe I Can Fly and Bump N' Grind, spent a weekend in jail on the sex charges before being released on US$100,000 bail on Feb 25.