Pele fathered so many children he was unaware that some of them even existed.

The 80-year-old soccer icon has been married three times, but admits to having had so many affairs, he lost track of his own children at one point in his life.

Pele said: "In all honesty I've had a few affairs, some of which resulted in children, but I've only learned about them later."

The sporting legend has five children - Kelly, 54, Edinho, 50, Jennifer, 42, and twins Joshua and Celeste, 24 - from his first two marriages, as well as more children from different affairs.

However, in the new Netflix documentary titled Pele, the soccer star insisted he was honest with his wives and girlfriends about his affairs.

He said: "My first wife, first girlfriend, knew about it. I never lied." 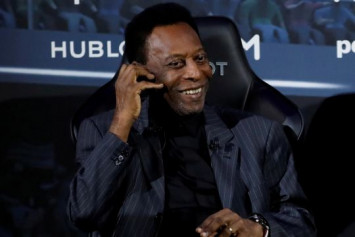 Pele grew up in poverty and was happy to embrace the fame and success that came his way at the height of his sporting career.

Speaking about his upbringing in Brazil, he shared: "We came from nothing - we didn't have much. We were poor but my father always worked."

Last year, meanwhile, Pele rubbished speculation he was suffering depression, but admitted he was rarely going out because of a persistent hip problem.

The sporting legend insisted his physical issues are "normal" for someone of his age.

Pele - who won his first World Cup at the age of 17 - explained: "I am good. I continue to accept my physical limitations in the best way possible but I intend to keep the ball rolling.

"I have good days and bad days. That is normal for people of my age. I am not afraid, I am determined, confident in what I do."