Best Adapted Screenplay winner for "BlacKkKlansman" Spike Lee poses in the press room with the Oscar during the 91st Annual Academy Awards at the Dolby Theater in Hollywood, California on February 24, 2019.

The 61-year-old filmmaker was seen trying to storm out of Los Angeles' Dolby Theatre on Sunday (Jan 24) when it was revealed the musical comedy-drama - which is about the true story of pianist Dr. Don Shirley (Mahershala Ali) and his driver Tony 'Lip' Vallelonga (Viggo Mortensen) on a concert tour in the Deep South - had taken the evening's most coveted award and he admitted he was unhappy that his film 'BlacKkKlansman' lost out at the honour.

Referring to 1989 Best Picture winner 'Driving Miss Daisy', Spike - whose 'Do The Right Thing' missed out on a nomination that year - held a glass of champagne aloft backstage and told reporters: "This is my sixth glass and you know why. I'm snake-bit. Every time someone is driving somebody I lose. But in '89 I didn't get nominated, so.

"I thought I was courtside at the Garden and the ref made a bad call."

However, Spike - who took home the Best Adapted Screenplay honour for the movie - praised the Academy's new leadership as he feels they helped him secure his first ever nominations this year. 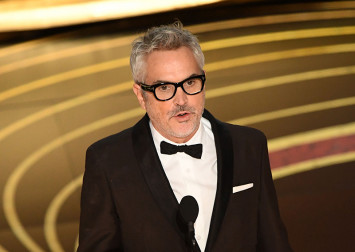 He said: "Without April Reign and the former president of the Academy I wouldn't be here tonight. They opened up The Academy. Three black women won Oscars. Like my brother Jay-Z says: Facts.

"Samuel L. Jackson and I went to the same college. I have known Sam from way, way back. To have him open up the envelope and say my name it was a great thing. Did I jump up on him? That was a genuine reaction."

When he accepted his award, Spike gave a stirring speech about racism in America, slavery, and urged people to vote in the upcoming presidential election, and apologised that he didn't get to give the thank yous he had saved for a hopeful second win.

He said: "I had two speeches. One with the list of people I was going to thank and the one that I gave. I said to myself, 'Self. Your black a** may not be here up here again.' So I apologise for the people I did not get the chance to thank.

"I am one of the blessed people in the world that gets to do a job I love."