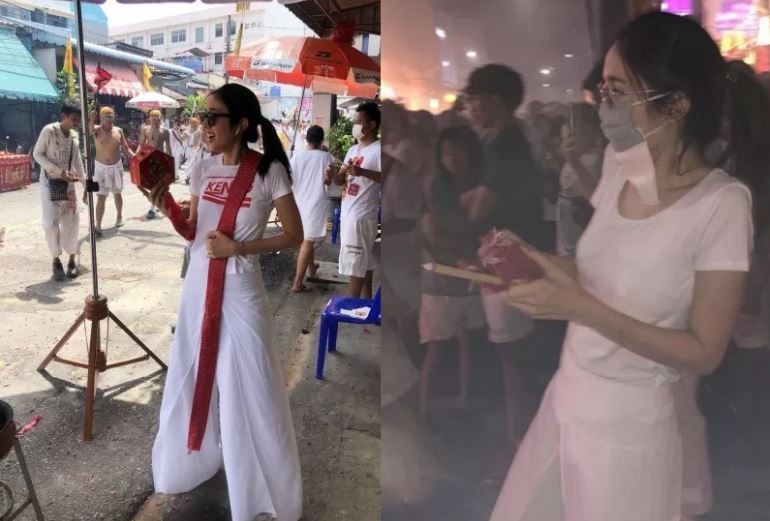 Firecrackers are dangerous stuff, so it flies in the face of all logic and common sense to hurl one into a group of people, or so you would think.

However, that's exactly what Thai transgender actress-model Poyd Treechada did during a recent trip to Phuket.

The video was uploaded to her Instagram on Sunday (Oct 18), to the horror of her followers.

To the uninitiated, it definitely looks a little dangerous: Poyd lights up the firecrackers and throws it across to a group of men participating in a procession.

Another person on the sidelines is seen doing the same. The explosives that Poyd throws fall   on someone before the camera pans to the 32-year-old beauty, who is laughing and smiling.

"Are you crazy?" wrote one alarmed netizen, while others berated her for her callousness.

However, just as many people came to the Thai beauty's defence, saying that the explosive-throwing is part of Thai-Chinese tradition.

They explained that the activity is part of the ritual-heavy Vegetarian festival, which falls during the 9th month of the Chinese Lunar calendar. It is celebrated in parts of Thailand, but festivities are at its peak in Phuket, due to the high population of Thai-Chinese there.

Devotees participating in the festival voluntarily walk in a procession dressed in white, believing that they are protected from the onslaught of firecrackers which are said to bring good luck.

According to commenters, the firecrackers used are of a special type and much less powerful than regular ones.

And then there's this astute observation:

The harsh comments prompted Poyd to edit her caption, stating: "This is our tradition to throw the firecrackers to the parade and who have the spirit of Chinese god and for good luck [sic]."

Being rained on by burning ashes is (quite literally) not cool in our books, but perhaps just not in Thailand.