They thought I was asking for money: Andie Chen on looking for 'sponsors' for his gaming company

When Andie Chen was still in the early stages of setting up his blockchain gaming company Freedom Nation, he approached his friends and asked if they would like to "put a bit of money in".

In a recent interview with AsiaOne for Celebrity Doing Things, the 36-year-old local actor revealed that it had not been easy convincing others about the business venture that he set up with his brother, entrepreneur Adam Tan.

Andie said: "I basically told them, 'Oh, I'm doing this thing. You can take a look for yourself and everything'.

"Actually, the majority of responses that I got was, they felt like I was asking for their money."

But if Andie isn't asking for money, what exactly is he looking for then?

Describing Freedom Nation's work as "digital asset and gamer management", he shared that he is looking for people to set aside a portion of funds in the metaverse and to "sponsor" blockchain gamers.

Read Also
We catch up with Chen Xiuhuan, Phyllis Quek and Angela Ang for a hiking session 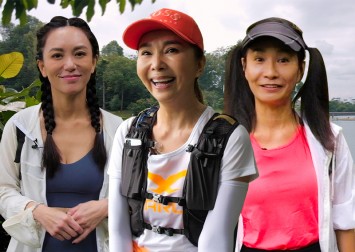 Unlike conventional video games, blockchain games usually require users to purchase non-fungible tokens (NFTs) to play. These players then earn tokens within the game that can be traded for cash.

"We will teach them (the clients) how the game works... and manage the NFTs for them. We will onboard players for them and when they play the game and win, we split the winnings together," Andie shared.

One of the sponsors who came aboard and "saw the vision" is fellow actor Nat Ho, he revealed.

"I can only give them the seed. After that, they progress on their own and it's beautiful to watch."