Thomas Ong has opened a wanton noodle stall together with MasterChef alumnus Aaron Wong at the Singapore Food Festival 2022.

Their shop may not have a star rating on Google but the celebrity duo of chef and actor behind its noodles has certainly drawn in a crowd.

Actor Thomas Ong and MasterChef alumnus Aaron Wong are currently selling wanton noodles during the Singapore Food Festival 2022 (from Aug 31 to Sept 11) at the Festival Village located at the Bayfront Event Space.

At $12 per bowl, the price may be a bit steep but Thomas told Shin Min Daily News in an interview last weekend that he sells 300 bowls a day.

"On a regular weekday we sell 300 bowls a day, and on weekends, we expect somewhere around 500 bowls," the 53-year-old actor said. "Feedback from customers has been good, with many customers liking the smoky flavour in our wanton noodle sauce and finding it unique."

In fact, business has been so good that Thomas even wrote on a Facebook post: "Wang Ji Wanton Noodles has been busy from morning to night, with no time to rest or even use the washroom!"

Even actors Li Nanxing and Vivian Lai went down to show their support for Thomas' latest business venture.

Despite the response, Thomas told Shin Min that as the booth is located outdoors, he is concerned he won't have customers if the weather is too hot.

As for why he decided on wanton noodles, it's not just because he likes the dish.

Thomas said he couldn't forget the taste of Aaron's wanton noodles after trying it out before, so he decided to take on this venture together with the former MasterChef contestant.

Getting to this point wasn't simple for him either.

Explained Thomas: "In order to participate in this food festival, we have been preparing for months, trying different recipes at home, even inviting friends and relatives to taste-test."

Read Also
$8 chendol and $12 laksa dumplings: Is Singapore Food Festival 2022 worth a visit? 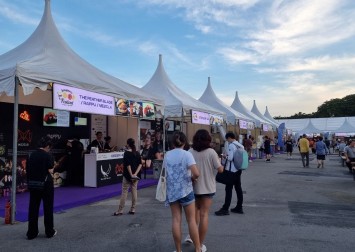 This is also his first foray into the food and beverage industry and he was nervous.

"This industry isn't easy. We had to prepare many ingredients by ourselves. Our kurobuta char siew is roasted by the chef with great care and the side dishes have been meticulously prepared. The noodles are made and sold on a per-order basis."

Even after they're done for the day, their jobs don't end there.

After closing their booth, cleaning up is necessary and according to Thomas, he only arrives home at 1am after sending the employees back.

Despite all the trouble and unfamiliarity with opening a wanton noodle shop, Thomas said he would consider opening a permanent store so long as the response is good.

"It's impossible to make plans now because each bowl of wanton noodles is made with sincerity," Thomas wrote on an Instagram post. "Our operating costs are also very high, so it's not very lucrative."