Time travelling? Coffee stain seen on Zoe Tay's shirt in Dark Angel before she gets splashed with drink

The coffee stain can be seen on Zoe Tay's shirt before the drink is thrown at her.

Mediacorp has responded with a statement.

A spokesperson said: "The 'mystery' coffee stain in the scene from Dark Angel was due to an oversight on our part. We thank audiences for pointing this out to us, and hope they will continue to enjoy Dark Angel. We will strive to do better."

Is time travelling a thing now? After the Marvel Cinematic Universe made a big splash with it, perhaps local broadcaster Mediacorp might want in on the same action.

Ziyuan is a lawyer who defends a scammer and at the courthouse, she gets confronted by one of the scammer's victims who starts yelling at her and accusing her of being evil.

When Ziyuan walks away, the victim snatches a cup of coffee from a bystander who is conveniently standing a stone's throw away and tosses the drink in her face, staining her shirt and suit jacket specifically.

To be honest, continuity issues can be quite common even on big Hollywood productions. Remember the Starbucks cup that was spotted in a scene in Game of Thrones?

Or how about the water bottle spotted in the series finale of, you guessed it, Game of Thrones? Damn Westeros, think of the environment, an entire city has already been razed to the ground. 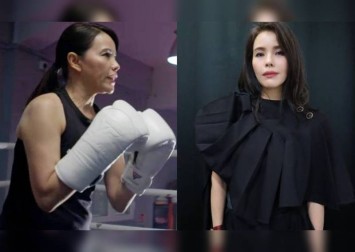 Bottom line is, if such high-budget productions already commit such oversights, then really, a coffee stain isn't such a big deal.

That said, we have reached out to Mediacorp and will update this article when we hear back.

Dark Angel is Mediacorp's latest thriller drama series following Ziyuan as she becomes a lawyer and attempts to uncover the entities that destroyed her family.

Her daughter goes into a coma while her son and husband die after an attack by a mysterious assailant.

The drama series also features a stellar cast of actors such as Qi Yuwu, Aileen Tan, Rayson Tan, Chew Chor Meng, Lina Ng and Jeffrey Xu — all of whom are Star Search finalists or champions.

The NC16 version of Dark Angel is streaming on meWATCH while the cleaned version is airing on Channel 8 at 9pm every weekday.