Tina Fey and Amy Poehler called out the lack of diversity within the Hollywood Foreign Press Association (HFPA) during their opening monologue at this year's Golden Globes.

The pair - who were hosting from the Rainbow Room in New York City and the Beverly Hilton hotel respectively - addressed the criticism the event's organisers have received for having no Black members within the body, as well as snubbing certain Black-led projects from the nominations list.

Amy said: "This is probably something we should've told you guys earlier. Everybody is, understandably, upset at the HFPA and their choices. Look, a lot of flashy garbage got nominated, but that happens, OK? That's, like, their thing, but a number of Black actors and Black-led projects were overlooked."

Tina interrupted: "We all know that award shows are stupid. But the point is, even with stupid things, inclusivity is important, and there are no Black members of the Hollywood Foreign Press.

"I realised, HFPA, maybe you guys didn't get the memo because your workplace is the back booth of a French McDonald's, but you've gotta change that. So, here's to changing it.

Amy added: "Yes, and looking forward to that change."

With nominees watching the event via video link, the venues instead had first responders seated in the audience, and the duo referenced the issue again as they jokingly explained to the socially-distanced crowds what the ceremony was all about.

Amy said: "Anyways, since you guys aren't usually here, let us explain what this even is. The Golden Globes are awards given out by the Hollywood Foreign Press Association."

Tina added: "The Hollywood Foreign Press Association is made up of around 90 international, no Black journalists, who attend movie junkets each year in search of a better life. We say around 90 because a couple of them might be ghosts, and it's rumoured that the German member is just a sausage that somebody drew a little face on."

Referencing the fact so many cinemas have been closed due to the coronavirus pandemic, Amy jokingly added: "At the Golden Globes, we give out awards for movies and TV, but, I mean, it's hard to tell them apart this year because movie theatres were closed, and we watched everything on our phone. 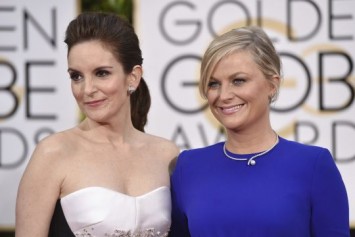 With awards shows often criticised for snubbing female directors, the hosts took the opportunity to highlight the fact three women were up for Best Director, alongside David Fincher for Mank and Aaron Sorkin for The Trial of the Chicago 7.

Amy joked: "There are great directors nominated tonight. Regina King for One Night in Miami, Chloe Zhao for Nomadland, Emerald Fennell for Promising Young Woman, and two other people, but we're out of time!"

Chloe went on to win the award.

Later in the event, three HFPA members took to the stage to address the recent revelation that there are no black members.

Helen Hoehne of Germany said: "We recognise we have our own work to do. Just like in film and television, Black representation is vital. We must have Black journalists in our organisation."

Former HFPA president Meher Tatna of India agreed: "We must ensure everyone gets a seat at our table."

And Turkish member Ali Sar added: "That means creating an environment where diversity is the norm, not an exception."