Tom Hardy contributed to script for Venom sequel, will get credit

Tom Hardy has contributed to the script for Venom: Let There Be Carnage.

The 43-year-old actor is set to reprise his role as Venom/ Eddie Brock opposite Woody Harrelson as supervillain Carnage in the upcoming instalment in the Marvel franchise.

And screenwriter Kelly Marcel has revealed that the movie star had a new role for the second movie and is "very involved" in the story of his beloved character.

She told Empire: "This is new for him, to get credit. But it's not new for him to be this involved.

"He's absolutely 100 per cent committed to everything that he does. He's married to Venom. He loves this character. He's very involved in what he thinks should happen."

While the Dunkirk star didn't put pen to paper, he took part in a series of video calls to share his ideas.

Kelly continued: "He doesn't get a pen and write. We spent months breaking the story together on FaceTime, riffing on ideas, seeing what worked, seeing what didn't.

"Then I took everything we spoke about and holed up somewhere for three months quietly, knocking out a script." 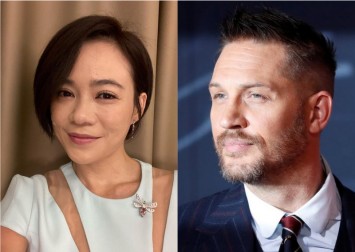 The Venom sequel is directed by Andy Serkis - who took over from Ruben Fleischer -  and he previously teased that the movie would be "thrilling", though declined to give any specific details.

He said: "I really can't say too much about it but we're 40 days into shoot and it's really thrilling.

"We've got the magnificent Tom Hardy at the centre of it and we see a deepening of the relationship between he and Venom.

"Obviously there's a nemesis character... and that's all I can say. It's going well and we got a fantastic cast in it."