You might have seen an arm tattoo making its rounds online.

After all, the tattoo is:

And, as we all know, anything BTS-related that blips on the ARMY's (BTS official fandom) radar tends to become social media gold. 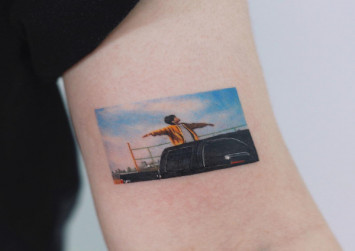 While the beauty and intricacy of the tattoo itself left us in awe, we made a second discovery that the owner of said arm is a Singaporean.

Meet 18-year-old Michelle Tan, a student whose arm shot to fame overnight for paying homage to her favourite boyband.

The tattoo was inspired by the BTS music video titled  "

"}" href="" rel="noopener noreferrer" target="_blank">Euphoria: Theme of Love Yourself 起 Wonder", where a yellow jacket-clad Jungkook stands on the back of a pickup truck with his arms spread wide open.

When asked what made her choose that scene in particular, Michelle told us she knew of the tattoo studio beforehand and wanted a photo/art-styled tattoo.

However, she had "no emotional attachment" to art pieces done previously by Seoul-based tattoo artist Saegeem, to whom she was introduced by a friend.

Michelle then came across a photo of the scene now inked into her bicep and liked the "vintagey effect" it had.

When questioned whether she was considering getting more tattoos done, Michelle gave an affirmative reply.

Will they be BTS-inspired?

"Not sure yet. If I come across something nice and ambiguous then maybe," she said.

We hope the boys manage to see her epic tattoo!