Taiwanese singer Vivian Hsu has reacted to criticisms of her behaviour at Taiwan's Golden Horse Awards on Saturday (Nov 21).

Hsu was on stage with veteran actor Tsai Chen-nan to present the awards for Best Supporting Actress and Best Cinematography.

Hsu, 45, is also a producer and actress in the movie Little Big Women, which was nominated for six awards, including Best Leading Actress for Chen Shu-fang and Best Supporting Actress for Hsieh Ying-xuan.

Chen was also nominated for Best Supporting Actress for another movie, Dear Tenant.

Hsu seemed to be more nervous than the nominees before announcing the winner for Best Supporting Actress.

She said she hoped Hsieh would win the award, which some took as a sign of disrespect for the other four nominees.

Hsu then opened the envelope for the winner of Best Supporting Actress, but said she did not dare look at it and handed it to Tsai.

He was about to announce the winner when she took the envelope back, looked at it and announced that Chen had won for Dear Tenant.

The whole process dragged on for about five minutes. There were strong reactions from netizens, who slammed Hsu for being "rude", "trying too hard to be humorous" and "talking too much". 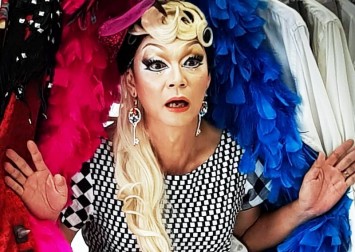 In response to the online brickbats, Hsu wrote a post late on Saturday.

She said in Chinese: "Being a producer for the first time, I tried to do my best. I was also a little bit excited and nervous as I tried to enliven the proceedings.

"Please forgive me if there are imperfections, and thanks for all the criticism and advice. Thanks to Brother Nan for the wonderful sentence."

Tsai had said before Hsu announced the winner that no one would remember the winners one week after the ceremony.