The WandaVision pre-finale breakdown: What's next for Vision and Scarlet Witch?

It was *redacted* all along!

Disney+’s very first Marvel series has proven to be a massive hit, outdoing popular shows like Bridgerton to become the most-viewed title of January 2021.

Part of its popularity can be credited to the constant cliffhangers dropped on us after massive plot reveals, fuelling speculation and rumours during the horrible week-long wait in between new episodes. It kind of reminds me of Lost. Remember all that fuss over what was in the Hatch? Good times.

Sadly, our time with Vision and the Scarlet Witch is coming to an end. Next week, WandaVision airs its final episode and with no Season 2 renewal in sight, this could be the last time we see either Avenger for some time.

Friday’s penultimate episode ‘Previously On’ was fairly eventful, giving us our first 40-minute episode this season (finally!) and no small amount of twists and easter eggs. Needless to say, we’re diving into full spoiler territory here, so if you haven’t seen WandaVision up to Episode 8 - avert your eyes!

Let’s kick things off with the biggest reveal so far: Wanda Maximoff has been a witch since birth. Previously, her powers were explained away in Avengers: Age of Ultron as the result of a series of experiments, carried out by Hydra’s Baron Wolfgang von Strucker.

Wanda possesses incredible telekinetic and telepathic abilities, while her brother Pietro (Quicksilver) is a speedster. The origins of these powers and the two’s lineage are fairly complicated in the comics, and have been retconned more than once.

First, their parents were normal humans: Django and Marya Maximoff. Then, they were golden-age heroes called Whizzer and Miss America. Then, their dad was Magneto, which made them mutants.

And then they found out that they weren’t related to Magneto at all, and they weren’t mutants, and their powers actually came from a being called the High Evolutionary. Comic shenanigans!

WandaVision offers a much simpler, more straightforward retcon by comparison. Episode 8 sees the witch Agatha Harkness walk Wanda through her troubled childhood, revealing that she was born with powers - but they had been drastically amplified after an encounter with the Mind Stone. 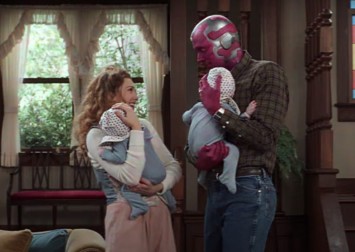 The Mind Stone even gives her a tantalising glimpse of the future, one in which she’s dressed head-to-toe in Scarlet Witch’s iconic comicbook garb - red tiara and all.

This power surge is why she was able to transmute the entirety of Westview and its populace into multiple sitcom eras’ worth of props and costumes with zero magical training, while it took Agatha, “years of study,'' to transform a bug into a bird.

Once Agatha finishes walking Wanda through her childhood memories, she throws leashes on Wanda’s newly-minted children and reveals that Wanda created all of Westview’s illusions using ‘Chaos Magic’, which makes her ‘the Scarlet Witch’.

We’ll have to wait until next episode to find out what exactly Chaos Magic is, but it looks like Wanda is a being of prophecy to witches like Agatha Harkness, whose existence has been foretold for an unknown amount of time.

When Agatha walked Wanda through her old memories, we finally got a solid answer to the question that’s been bugging us from the beginning: What the heck are Wanda and Vision doing in a bunch of sitcoms?

The show is clearly a love letter to old eras of TV sitcoms - from black-and-white, to colour, to mockumentary - but we never really knew why we were watching these two characters act out gags, only that Westview residents were playing unwilling participants to Wanda’s sitcom party.

The very first flashback we get is the most telling - one where Wanda and her family sit down to watch sitcoms in Sokovia, using these shows as an escape from their war-torn surroundings.

We see glimpses of some of the comedies WandaVision has been referencing all season: the Dick Van Dyke Show, I Love Lucy, Bewitched and Malcolm in the Middle. 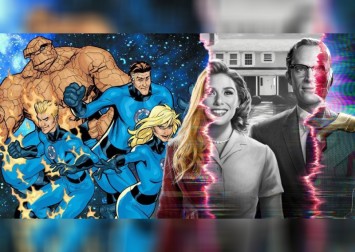 These references weren’t at all subtle, but it’s cool that we got visual confirmation! Wanda never stopped falling back on sitcoms as an escape - we see her binging Malcolm in the Middle right after Pietro’s death in Avengers base as proof.

It’s likely that she also checked out The Office and Modern Family at some point before Vision’s death in Infinity War, since those shows were referenced in Episode 7 too.

You can see lots of parallels between these sitcoms and the events of WandaVision - like the episode of Malcolm in the Middle that Wanda watches with Vision, where Hal builds something that ultimately collapses on him. Earlier on in Episode 3, we saw Vision try to build a swingset only for that to break down too.

The episode of the Dick Van Dyke Show that Wanda’s family watches is S02E21: It May Look Like a Walnut, wherein the protagonist starts to lose touch with reality, and begins to believe nothing is as it seems. That’s WandaVision in a nutshell - pun intended.

We didn’t get to see much of Wanda and Vision’s kids Tommy and Billy this episode, besides them being put on magical leashes, but it’s worth talking about who these two become in the comics.

‘Billy’ is William Kaplan, AKA a powerful mage called Wiccan, who is said to one day succeed Doctor Strange and become the Sorcerer Supreme. ‘

Tommy’ is Thomas Shepard, AKA Speed - a teen superhero with the quick-moving abilities of Quicksilver. Originally, these two kids were named Thomas and William Maximoff, created from individual fragments of the demon Mephisto’s soul by Wanda (long story).

Eventually, they were reabsorbed into Mephisto, destroying the demon, and reincarnated as Wiccan and Speed. 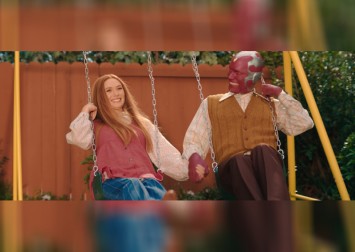 I know, I know, it’s complicated. WandaVision clearly has a plan for these two kids however, and given their history in the comics, I wouldn’t count on them vanishing into the ether once this series ends.

They’re bound to be more relevant down the line, seeing as almost every Marvel series on Disney+ has one thing in common: they’re setting up a new generation of superheroes.

Think about it: WandaVision has Wiccan and Speed, Ms. Marvel has Kamala Khan, Hawkeye has Kate Bishop and Ironheart has Tony Stark’s successor Riri Williams.

I have my own theories about the upcoming Loki series introducing the trickster god’s reborn adolescent form Kid Loki, but that’s a bit of a reach.

The point is, most of these characters (Wiccan, Speed, Kate-Hawkeye, Kid Loki) end up joining the Young Avengers in the comics, while the remaining few (Ms. Marvel, Ironheart) join the Champions - another teen superhero team.

Marvel could easily combine both teams for a movie down the line, or even a crossover event series like Netflix’s ill-fated Defenders. Being part of the Young Avengers is central to a lot of these characters’ backstories.

Heck, Wiccan even marries his teammate Hulkling during the comics' Empyre event. If Tommy and Billy end up making it out of WandaVision alive, you can bet that a Young Avengers project is on the horizon.

If you quit Episode 8 the moment it cut to credits, you missed a very important post-credits tease. SWORD’s slimy acting director Tyler Hayward finally turned to Wanda’s magic after, “trying every power supply under the sun,” to bring a newly-rebuilt Vision back to life - only this one is clearly different from his magical counterpart in the Hex.

He’s mostly blue/white for one, and one can assume that since Hayward earlier referred to Vision as a, “sophisticated, sentient weapon,” this Vision isn’t going to be particularly heroic in nature.

Once again, we can turn to the comics to see where this storyline is going. In Marvel’s ‘Vision Quest’ storyline, the Vision was abducted and subsequently dismantled - just like he was in this episode.

After Hank Pym (the first Ant-Man) rebuilds Vision, the hero returns with a chalk-white appearance devoid of colour and emotions.

He becomes a robot, for all intents and purposes, without a soul. Think Sam Winchester from Supernatural Season 6. This Vision grows apart from Wanda Maximoff due to the nature of his new personality, but he later regains his emotions and a new body, and things go back to normal.

We’re obviously not going to see this entire arc play itself out in just one episode, but one can expect White Vision to go toe to toe with Wanda at the very least.

The people of Westview need to be freed from their horrific mental prisons, and there are very few characters in the MCU who could best Wanda in battle to do this - but White Vision stands a decent chance.

Let’s not forget that the full-colour Vision we’ve been following all this while is still in the Hex, and on his way to reunite with Wanda. Between two Visions, a Scarlet Witch and Agatha Harkness - it’s honestly hard to tell who’s going to come out on top in the finale.

A lot of people are speculating that the series will end with these two Visions somehow merging, seeing as one has a physical body and the other has a soul. This would put Vision back in the MCU - but I have my doubts.

This series deals with Wanda’s overwhelming sense of loss and grief, and I doubt Marvel would pay those themes off with Vision just… coming back. There aren’t any emotional stakes there, and it doesn’t feel like we’re barrelling towards a happy ending anyway.

And she killed Sparky, too!

Agatha’s been pushing Wanda’s sanity to the brink all this time, but Episode 8 revealed that it wasn’t just Agatha all along. Most of the blame still belongs to Wanda, who snapped in grief and emotionally tortured an entire town after Vision’s death.

Agatha isn’t even a real villain in the comics - she’s acted as Wanda’s magical tutor and protected the world multiple times. I think Agatha just wants to help Wanda reach her full potential as the Scarlet Witch, rather than attack her and her children for no reason. 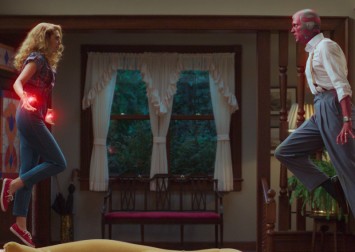 Regardless, WandaVision has a ton of loose ends to tie up in just one episode. Monica Rambeau has powers now, but she was last seen with Evan-Peters-Quicksilver. Full-colour Vision is on his way to see his wife, but their children lie at the mercy of Agatha Harkness.

White Vision is now in the mix, although his take on the whole situation remains to be seen. Wanda is pretty far from ever being an Avenger again, and it's hard to imagine her peers being cool with her actions thus far.

We know that the events of this series lead directly into Doctor Strange and the Multiverse of Madness, so whatever the Scarlet Witch becomes - it’s the Sorcerer Supreme’s problem now.

You can subscribe to Disney+ here, if you haven't caught up with WandaVision.