On Sunday night (Dec 19), the 45-year-old hit back at his ex-wife Li Jinglei's nine-page post accusing him of multiple infidelities, solicitation of prostitutes and verbally bullying her during their marriage. Li, 35, released the expose on Friday night (Dec 17), two days after Wang confirmed they were divorcing.

In a four-page post on his social media accounts, Wang denies ever cheating on Li: "I can say with absolute certainty that I was never unfaithful in our marriage."

He began the post by saying: "This is the hardest day of my life. It has been a painful, gigantic nightmare. My dilemma is this: If I rebut these untruths levelled at me, it'll reflect badly on the mother of my three children. But if I don't, people will believe the rumours about me."

He clarifies several claims Li makes about their romance and marriage. Li says that they first met when she was 16 and that Wang courted her and behaved flirtatiously and intimately with her then.

Rebutting this version of events, Wang says: "I first got to know Michiko Nishimura (the name I knew her by then) in 2003 after one of my concerts. But we lost contact for about 10 years after this."

Li Jinglei, who is half-Japanese, also has a Japanese name. Wang attached screenshots of two e-mails to verify his account. In it, Wang says he has not seen Li "in forever" and Li opens her reply to Wang with: "Hello stranger! Long time (no see)!"

On their marriage, Wang claims that Li forced him to wed her when she fell pregnant shortly after they began dating. "I was very happy because I've always wanted to have children. But we had not yet arrived at the stage of discussing marriage."

He says that Li threw a tantrum and insisted that they marry immediately, or she shall "disappear with the baby in her tummy and never be found again".

Wang adds: "Our marriage began on Nov 27, 2013 and lasted until our separation on Aug 5, 2019. I lived under fear, extortion and threats for these five years and eight months." 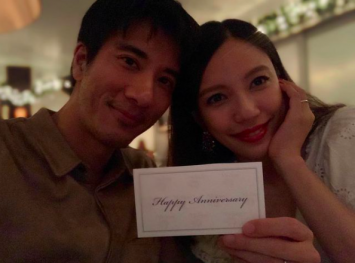 He also denies not giving Li her fair share of assets after their split. He alleges that Li agreed to receive around 150 million yuan (S$32.2 million) from the divorce.

Attaching extracts of what looks like legal documents relating to the couple's divorce, Wang says Li has half of their Bel Air property in California, valued at US$12 million (S$16.4 million) and half of their investment account, which holds around US$15.7 million.

Wang adds that he also agreed to give Li 210,000 yuan (S$45,000) in monthly allowance and provide her with a nanny, chauffeur, car and maid to maintain her lifestyle.

"This is in the hopes that Jinglei can lead a comfortable life, but she feels that this is not enough," he says.

He pleaded with Li to think of their three children, aged three to seven, and to stop airing their affairs on the Internet. Wang implied that he currently has no access to his kids. "I'm begging you to let me see them," he says. The couple have two daughters and a son.

In his concluding paragraphs, Li apologised to his parents. His father released an open letter on Sunday, which claims Wang led a hellish life after marrying Li. Li hit back at the statement, calling it "lies" and said she will sue the father-and-son duo if they did not apologise for defaming her.

Wang wrote: "Thank you for your handwritten letter last night. I have burdened my parents with the mistakes I've made in my marriage. I am deeply apologetic."

In particular, she points out that the Bel Air property and the investment account are assets that the two had owned individually and are not part of Wang's divorce settlement to her. She also attached another extract of a legal document in which Li supposedly relinquishes Wang from any duty to support and maintain her post-divorce.

In another thread of the saga, Singaporean twin pop duo BY2's Yumi, who was rumoured to be involved in an extramarital affair with Wang, released a long statement on Sunday as well.

In it, she denies seeing Wang after he got married and claims that she was Wang's ex-girlfriend. She says the two began dating in 2012 and broke up in 2013, before Wang got married.