Call it catchy, cringey or cheesy — the recent fad of Covid-19 vaccination music videos is here to stay.

This time, it has gone classy to encourage more older folks to get the jab.

Taking inspiration partly from the colour and glamour of late-night variety shows in the 1980s, the trio sang and danced in a mix of Cantonese, Hokkien, Teochew, and Mandarin, while asking the elderly if they had "vaccinate already".

The camera panned from a kopitiam and provision shop to a market and studio, transitioning smoothly from one scene to the next in two minutes, all in one take. Not an easy feat.

Local filmmaker Royston Tan, who directed the music video, revealed it was a rough nine-hour day of filming for the veteran stars.

Speaking to Lianhe Zaobao, the 44-year-old explained: "If someone didn't perform well, or if something went wrong with the filming or lighting, we would have to start from the beginning again. I was very nervous initially."

He praised Lingling, Wang Lei and Marcus for their professionalism throughout the filming process, which consisted of 15 rehearsals and 15 retakes. 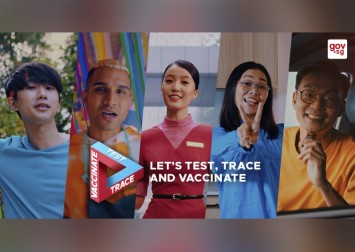 Recalling how the trio managed to transition through the different scenes all in one take, Royston said: “Since they had to go from one scene to the next in just six seconds, Wang Lei sprinted through each set with four or five assistants running alongside him to help him change his clothes."

He added that once, Wang Lei tripped over a prop and bumped into Lingling. Even though he was bleeding from a cut on his leg, he stood up and continued running.

And although Lingling's knees hurt before filming, she declined to take painkillers as she was worried it would affect her performance.

“Even though they are not young anymore, they told me they would give their best. It made me very emotional. They were exhausted from the shoot, but they really gave everything for this video,” Royston said.

At the time of writing, the video has amassed 208,000 views on Facebook and over 32,000 on YouTube. The music was composed by local producer-singwriter Jim Lim, while Marcus wrote the lyrics.