Warner Bros defends JK Rowling after a question about her was blocked at a Harry Potter event.

JK Rowling has been defended by Warner Bros after a question about her was blocked at a Harry Potter event.

The Harry Potter writer, 56, was supported by the studio after a Sky News reporter was stopped from asking actor Tom Felton about Rowling on the 25th anniversary of Harry Potter and the Philosopher's Stone.

Felton, 34, who played Draco Malfoy in the Harry Potter films, stayed silent as a third-party publicist said off-screen "next question please" when asked about the Rowling's absence from the anniversary celebrations.

After being questioned on why the line of enquiry was cut short, the PR team said: "JK Rowling is not connected to Warner or Tom Felton, the team felt it was not relevant to the piece."

But Warner Bros have hit out at the statement and told MailOnline on Wednesday (June 29) it was "wholly wrong".

The studio added it was proud of working with "one of the world's most accomplished storytellers" on both the Harry Potter and Fantastic Beasts franchises in the last two decades.

Felton was being interviewed on camera this week at the Mandrakes and Magical Creatures feature at Warner Brothers Studios when the incident happened.

A Warner Bros Studio Tour London spokesperson told the MailOnline: "Warner Bros has enjoyed a creative, productive, and fulfilling partnership with JK Rowling for the past 20 years. 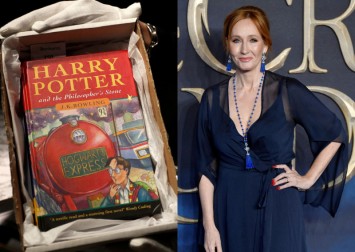 "She is one of the world's most accomplished storytellers, and we are proud to be the studio to bring her vision, characters, and stories to life now — and for decades to come.

"On Monday, a statement was issued by a third-party media agency that appeared contrary to this view. The statement was wholly wrong, and Warner Bros Studio Tour London regrets it happened as part of a media event that day."

JK Rowling has been under scrutiny over her position on women's rights and gender.

She faced accusations of transphobia after she mocked an online article in June 2020 that used the words "people who menstruate" instead of "women".

She later defended herself against the claims in an essay but has since been criticised by some.