Japanese comedian Pikotaro, the man behind the "pen-pineapple-apple-pen" (PPAP) craze of 2016, became a dad for the first time recently.

His daughter was born on Father's Day (June 17).

Said Pikotaro whose real name is Kazuhito Kosaka but is also known by his stage name, Daimaou Kosaka: "Today is Father's Day, which is an often overlooked occasion compared to Mother's Day. But my daughter has given me the world's best present.

And what better way to welcome your daughter into the world than with your own hit song? One that could even be a panacea to your child's incessant crying.

In a video uploaded to YouTube on June 18, Kosaka is shown playing the viral ditty to the bawling day-old baby.

After several seconds, the crying stops and even Kosaka himself seemed surprised by his daughter's reaction. 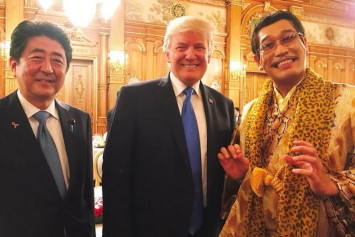 Could 'PPAP' actually be a hack for newly-minted parents like himself?

Sure, the earworm may have been played to death, but to survive your baby's first few months, it may be well worth putting it back on your Spotify list.