The Weeknd has revealed his new album is "coming soon".

The 28-year-old singer may have just released a six-track EP 'My Dear Melancholy' in March this year, but he's already got big plans for the full-length follow-up to 2016 record 'Starboy'.

Speaking to his fans during a show in his hometown of Toronto this week, the Canadian star said: "I wanna let you guys know, being in Toronto these past two days... I haven't been this inspired in years, I got to tell you.

"I want you guys to be the first to know, I'm working on my new album right now. 'Chapter 6' coming soon, let's get it!"

He later took to Twitter to add fuel to the fire and hinted that he has something special in the pipeline.

some chapters are smaller than others. not this next one though...

He tweeted: "Some chapters are smaller than others. not this next one though... (sic)"

The Weeknd has certainly been busy if a new LP is coming, because he previously revealed he scrapped a "beautiful" and "upbeat" collection before unveiling his EP earlier this year.

He explained: "Prior to 'Melancholy', I had a whole album written, done, which wasn't melancholy at all because it was a different time in my life...

"It was very upbeat - it was beautiful... I don't want to perform something that I don't feel." 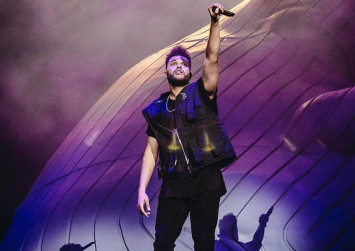 The Weeknd's music so far has earned him some famous fans, and Barbra Streisand has admitted her songs 'Don't Lie To Me' and 'The Rain Will Fall' were inspired by his song 'Starboy'.

Opening up on first hearing it, she said: "It must have been some awards some... I didn't even know what the hell he was saying. But the vibe was great.

"I loved the sound of the music - the pattern of it. I thought, 'That is really cool.' "