If you've spotted a Park Min Young lookalike in Singapore, it might have been the What's Wrong With Secretary Kim? actress herself.

After all, her sister lives on our sunny island, so the actress has come to visit a few times.

"My sister lives in Singapore, so I'll visit her tonight or tomorrow," says Min Young in English.

In town for her first official appearance at the Viu x Samsung Galaxy Exclusive Fan Party at the Flower Dome on Friday, she spoke in a smattering of English, later mostly in Korean. 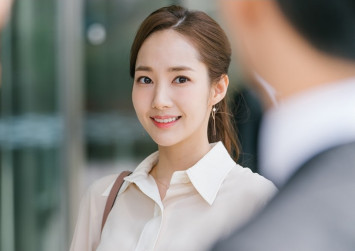 Looks like her secretary character's multilingual abilities have rubbed off on her!

Here are the highlights from the press conference, from her favourite scene in the hit drama to her beauty tips.

On her personal style

I'm a very casual person, but when I'm overseas, I try to put on an outfit that (suits) the country. In Singapore, it's very hot, so I wear something more lightweight and airy. When I was in Paris, I wore a really big hat.

On her secret to glowing skin

Because of my job as an actress, I have to put on makeup for a long period. When I'm filming a drama, I have to wear makeup for 20 to 24 hours. My face gets dry and bad really fast. So every time I have a break - even a short break - I would take off my makeup. I also put on two to three masks a day.

On filming her first rom-com What's Wrong with Secretary Kim

I'm not sure if it's because this is my first romcom or because of this particular drama... On the film set it was really fun, everyone was really nice. Rather than thinking about the character, I would think of how to make the scene more fun.

On how she identifies with Kim Mi Soo, her character in What's Wrong with Secretary Kim

On her favourite scene in What's Wrong with Secretary Kim

At the end of episode five, Mi So fails in her first kiss. Because Young Joon could not get the kiss done. She was waiting for the kiss, the chair spun around until it hit the wall. Mi Soo had to make many interesting expressions for the scene, I really enjoyed it.

On whether she prefers romcom to more serious dramas

I want to do rom-com. I want to play a female character who is really funny. As an actress, I don't want to constrain myself. I'm open to all kinds of roles.

On what she does to prepare for a drama

It really depends on the project. For What's Wrong with Secretary Kim, I had to lose weight, so I went on a diet. Before (acting in) a drama, I will think about the character's history, life, and job function.

On her dreams in 10 years' time

I will still be acting in the next 10 years. When I first started out, I never imagined that I'd be acting for that long. Even when I get married and have kids, I will still continue to act.