‘I asked who he was secretly sending messages to’: Jayley Woo on how fiancé proposed and why they choose this ROM date

Local actress Jayley Woo has shared more details about her fiancé and his wedding proposal.

She’s about to get her happily ever after.

Local actress Jayley Woo has shared more details about her fiancé and his wedding proposal following her Instagram post on Oct 23 announcing the double whammy of both an engagement and pregnancy.

Speaking with host Juin Teh on #JustSwipeLah, Jayley, 30, said about the happy occasion: “It can be counted as triple happiness — because it’s my husband’s birthday and [the news of] my pregnancy and my engagement — doing them all together at the same time.”

Although the couple have not registered their marriage, Jayley calls the mystery man — known only as Mr Chen — her ‘husband’ because “it’s just a matter of time”.

She added that her father suggested they should get their marriage registered on her birthday, Dec 27, so that in the future, they could celebrate three occasions — her wedding anniversary, birthday and Christmas — together.

Jayley also went on to reveal how her fiancé proposed.

She said that her plans for the day had been to “do a wedding make-up trial” for a friend’s makeup artist. She had her suspicions on whether make-up trials are a common thing, which her fiancé reassured they were.

“When I got there, I cried immediately because I never thought that would be the day,” she said, adding that it came as a complete surprise to her. “Everyone was there, my family and even my dog were present.”

She explained that Mr Chen had meticulously planned the proposal for more than two weeks, going as far as to change his handphone password to keep Jayley in the dark.

“I asked who he was secretly sending messages to and he was on the phone every day,” she added, before she realised the secrecy was due to the proposal.

Jayley also discussed how her fiancé, whom she got to know through fellow actress Julie Tan, was a hit with her family, adding that “Once you get past my father, everything else will be okay”. 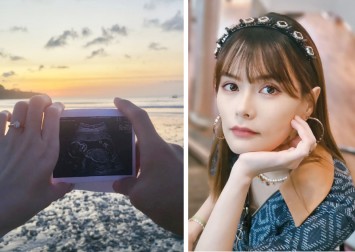 “They’ll have breakfast together every day,” she said. “And sometimes when I can’t wake up, he’ll say, ‘Then I’ll go with your parents, I don’t care about you’.”

She joked that she’s making an effort to have breakfast with them now lest her parents get snatched away by him.

After the death of her former boyfriend, local actor Aloysius Pang, in January 2019, Jayley admitted that she was “pessimistic and depressed” but felt that time heals all wounds. The concerns of her friends and family also made her want to not “let them down”.

She added a word of advice for anyone else who’s grieving in a similar way: “Sort out your inner world first and naturally you’ll have the chance and fate to meet the right person like I have.”