SINGAPORE - Popular South Korean stars Kim Go-eun and Wi Ha-jun were spotted filming at a seafront condominium in Singapore on Friday (July 1) at around 11am.

Kim, 30, was seen in a brown dress with her hair tied up while Wi, 30, was wearing a grey shirt and white pants. They were shooting scenes for their upcoming K-drama Little Women, a modern day adaptation of Louisa May Alcott's classic novel. Kim is playing the eldest sister of a poor family.

They were filmed walking on the pavement in the condominium compound, with scenes shot from different angles. At one point, Kim broke into laughter while filming a scene where she spoke to Wi.

The heat seemed to get to Kim as she held an electric fan to her face when the cameras stopped rolling.

The condominium was quiet when The Straits Times visited but there was a group of crew members in the filming area near the pool. Staff held signs that said "filming in progress" and prevented passers-by from walking through the area. Some residents were watching the filming from their balconies.

Ms Shannon Pang, a student and condominium resident, said she saw make-up artists and racks of clothes in an empty unit on the first floor of the complex on Friday morning. 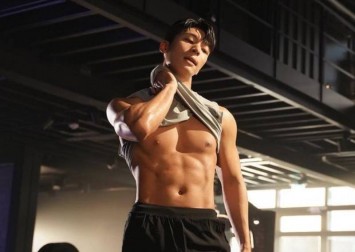 She was first informed through a written letter that the condominium would be used for a K-drama shoot a week ago. She said residents were asked to consider travelling through the apartment complex via the basement carpark.

Ms Pang said that Kim looked really thin in person and added: "It's quite surreal. This is the closest I've ever been to Lee Min-ho and Gong Yoo by association."