Yann Yann and Chin Han will be joined by some of the biggest names in Asian showbiz — Michelle Yeoh and Daniel Wu. The cast also includes Ben Wang, Ke Huy Quan, Jim Liu and Sydney Taylor.

Titled American Born Chinese, the genre-hopping action-comedy is based on the graphic novel of the same name by Gene Luen Yang.

According to a release shared earlier today (Feb 8), American Born Chinese tells the story of Jin Wang, an average teenager juggling his high school social life with his home life.

When he meets a new foreign student on the first day of the school year, even more worlds collide as Jin is unwittingly entangled in a battle of Chinese mythological gods. The action-packed coming-of-age adventure explores identity, culture and family.

Michelle is tapped to play the Goddess of Mercy Guan Yin while Daniel plays the Monkey King Sun Wukong. Ben will be starring as Jin while Yann Yann and Chin Han play his parents.

Destin Daniel Cretton, who directed Shang-Chi and the Legend of the Ten Rings, is set to direct the series and serve as one of the executive producers.

This isn't Yann Yann's first foray into Hollywood as it was announced in June last year that she was cast in the upcoming Netflix thriller Havoc along with Singaporean actor Sunny Pang.

Read Also
Yeo Yann Yann once told by director 'you're not pretty, not very talented, why are you still acting?' 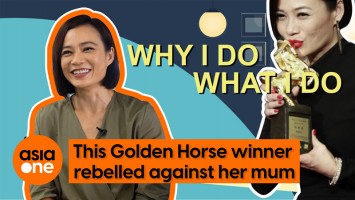 Meanwhile, Daniel, 47, took to Instagram to share the news and wrote: "This project is exciting for me for multiple reasons. I have known [Michelle] for over 20 years and we have always wanted to work together but it never worked out so now we are finally are getting the chance.

"I've been asked to play the Monkey King Sun Wukong many times but never felt the timing was right, now I finally get to play one of my childhood heroes. When I was growing up, there were no shows for Asian American kids like me, so being part of this project means so much for not just me but for a whole generation of kids who will grow up seeing people like them on screen."

The release date for the series has yet to be announced.