Youn Yuh-jung joked her Oscar win was down to "luck" and "American hospitality" after she won the Best Actress in a Supporting Role prize on Sunday (April 26).

The Korean actress sparked laughter among the attendees at the Los Angeles ceremony when she insisted there shouldn't have been competition between herself and the other women on the shortlist, Maria Bakalova (Borat Subsequent Moviefilm), Glenn Close (Hillbilly Elegy), Olivia Colman (The Father), and Amanda Seyfried (Mank) and there was no major reason why her performance in Minari had been singled out.

After joking that everyone was "forgiven" for frequently mispronouncing her name, she added: "I'm living in the other part of the world, I usually watch on television the Oscars event... Me being here by myself, this I cannot believe. Let me pull myself together.

"I don't believe in competition, how can I win over Glenn Close? I've been watching her, so many performances... All the five nominees, we are the winners for different movies, we play different roles, we cannot compete. 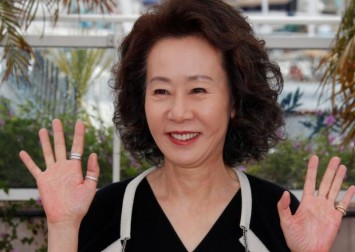 "I had a little bit of luck. I think I'm luckier than you. Also maybe American hospitality for the Korean actor, I'm not sure."

The 73-year-old actress then thanked her family, before dedicating her win to the late Kim Ki-Young, one of the first directors she ever worked with.

She said: "I'd like to thank my two boys who make me go out and work. This is the result because mommy worked so hard.

"I'd like to direct this to my director, Kim Ki-Young, who was a very genius director. We made a movie together, the first movie, and he'd be very happy if he was still alive."