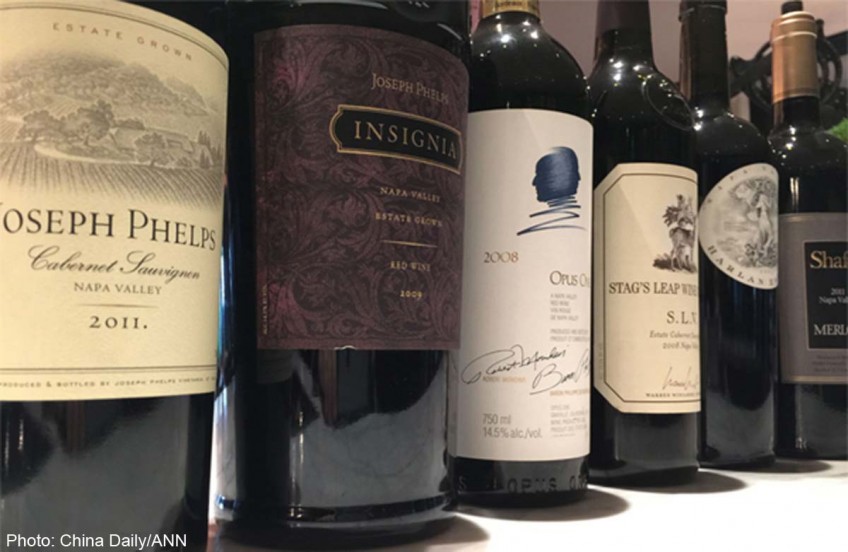 Wines from California's best-loved wine region are easy to find in China, though even some of the most well-heeled oenophiles have yet to discover it.

"For many, Napa Valley is synonymous with Californian wine," says Charles Sow, sommelier at Temple Restaurant Beijing. "Napa is also perceived as the standard bearer for quality American wine. Though the USA has a long history of growing wine back to (Spanish settlements in) the 1500s, America's currently flourishing wine industry only dates back to the 1960s.

"I love Napa wine," says Matthew Myers, assistant director of food and beverage at the Rosewood Beijing hotel. Myers lived in the Napa Valley town of St. Helena for about a year, discovering many intriguing vintages while working to launch a fine-dining restaurant there.

"Many of the most classic wines of Napa are distributed in China," he says, citing Joseph Phelps, Opus One and Shafer as must-haves for top hotels and restaurants here. "But some of the top wines you'll find everywhere in San Francisco - Sonoma, Paso Robles, are not represented here yet.

"There are good cabernets and merlots - the Bordeaux-style blends," he adds, "but we're still waiting to get Russian River pinot noirs, for example."

Many Chinese see Napa wines as comparatively expensive, he says.

"We have customers who will spend 12,000 to 18,000 yuan (S$2,600 to S$3,900) on wines in an evening," he says, "but they are very price savvy. Unlike in the US, in China they can buy the same wines directly from the same distributors we do, so our business model can't rely on big mark-ups on wine. To attract wine lovers here for dinners and events, the wine has to be more competitively priced - we offer other luxuries to deliver a complete five-star experience."

First, optimism about the potential of California's soil to produce good wine, in conjunction with a rise of wealth in the 1960s. Second, the "Judgement of Paris", a well-publicized 1974 blind-tasting event where California wines beat top French vintages. Third, the rise of Robert Mondavi, "a visionary who believed in the wine-making potential of Napa."

Sow notes that California wines are sometimes dismissed as "too oaky", but says that is very misleading. In the early days, when wines from the region were low quality, oak served as a cover, giving a gloss to cheap wines like gravy does over a cheap cut of meat. But proper oaking of good wine, however, is like putting a muscle shirt on an athlete: It showcases the best features.

"Oak is usually meant to add additional complexity to bold, powerful wines by complimenting the tannins with a slight sweetness," he says.

The French, of course, use oak, too.

Opus One, 2005 (9,000 yuan) Widely considered the benchmark for Napa winemaking. Opus was a co-operation between Mondavi and Baron Philippe de Rothschild; the first vintage was produced in 1985 to worldwide acclaim and recognition. Voluptous, powerful, rich, full.

Peter Michael, Les Pavots, 2010 (4,200 yuan) Blend of cabernet sauvignon, cabernet franc and merlot. Arguably the best Bordeaux-styled wine in Sonoma County. Founded by Sir Peter Michael, entrepreneur and former CEO of Cray UK, who was greatly inspired by the story of the Judgment of Paris.

Silver Oak, Alexander Valley, 2008 (1,480 yuan) Known for producing wines that are soft, plump and with gentle tannins, the company has a 40-year history, making it one of the oldest wine producers in the region. Solely dedicated to producing Napa-style cabernet sauvignon.