I'm normally a rational person, until you put me in front of a good Taiwan or Teochew porridge buffet. All of a sudden, I think it's totally fine to pay $20 for unlimited servings of plain rice gruel and canned peanuts. I can almost hear you screaming, "wah lao, damn waste money leh!"

… Unless, of course, you're just like me. Then you probably gian braised tau kee the same way "foodies" fantasise about atas French oysters and expensive champagne.

High five! Now, read on for porridge buffets in Singapore to feast at. Note: Although many Taiwan/Teochew porridge dishes are seafood-, egg- and veggie-based, braised pork is also one of the staple ingredients, so it goes without saying that all of these places are not halal. The most halal-friendly option would be the ART, which doesn't use pork or lard in their cooking.

Marina Square's somewhat infamous porridge buffet restaurant used to be called Hotpot Culture, but following a rat-related run-in with the NEA, they apparently reopened and rebranded themselves as iSteamboat.

Despite the name, iSteamboat is better known for offering the cheapest porridge buffet in Singapore at just $8.80++ (less if you buy vouchers on Fave). Heck, that's cheaper than some of my Teochew mui meals.

You get free flow of 24 items including sweet potato porridge, sides like luncheon meat and chye poh eggs, PLUS unlimited drinks, ice cream and fried rice/bee hoon/kway teow. It's every bit as trashy as it sounds. If you bring a date here and he/she doesn't mind, marry him/her.

Quality Hotel's porridge buffet has been around for so long that it's the first place that comes to mind for many Singaporeans - especially those with late-night cravings for porridge.

That's because they have a really cheap supper porridge buffet at just $12.80++ on weekdays and $14.80++ on weekends. Apart from porridge and the sides like pickles and fermented tofu, there are also Asian buffet items like popiah, laksa, curry chicken, seafood dishes, and desserts. Super worth it!

Quality Hotel also have a dinner porridge buffet, but at much steeper prices.

At $12.90+, Manle's Teochew porridge buffet lunch may be a little more expensive than ordering Teochew mui at the hawker centre, but then it comes with air con so you can comfortably gorge on their 30 dishes.

Although it's not your typical porridge buffet place, I just had to include the ART, the in-house restaurant of Assumption Pathway School. The ART is a training ground for students to hone their F&B and service skills.

The cafe usually serves individually plated Western food, but once a month, they put out a porridge buffet to let the students practise cooking local food in larger quantities. It's not halal, but they don't use pork or lard. 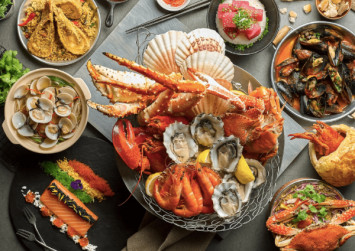 Since the students tailor their cooking to the number of patrons, the porridge buffet is by reservation only. Email the.art.aps@gmail.com to reserve.

Porridge buffet dinner: 6pm to 9.30pm every last Friday of the month

Did you know that there's actually a cheap Taiwan porridge buffet place along Orchard Road - and in a hotel, no less? … Okay, it's no Shangri-La, but Orchard Grand Court's Crystal Cafe has a certain '80s hotel charm, complete with obiang patterned carpet.

Anyway, the star of the show is the simple and comforting Taiwan porridge buffet spread at well under $20 per head. Yes, even for dinner.

I especially like that they have an extended lunchtime on weekends, so you can skip dinner after stuffing yourself with enough braised pork belly to feed a small Chinese army.

Getting random hankerings for porridge in the middle of the night must be quite a thing here, because in addition to Quality Hotel, you can also get a supper porridge buffet at One Farrer Hotel's Escape restaurant.

One Farrer's Teochew porridge buffet is simple but nice, with sweet potato congee and the classic dishes like steamed fish, pickled veggies and mei cai pork belly. The ambience is quite nice too, especially when you think about how you paid only $16++ for a hotel buffet.

The best/worst thing about One Farrer's porridge buffet is that it starts and ends super late. I'm not willing to sacrifice my ZZZs - even for porridge - but it's definitely a plus for night owls looking for something other than prata.

The only Teochew porridge buffet place in the CBD, Orchid Hotel's porridge buffet is a godsend for corporate slaves who just want to binge-eat all their problems away at lunchtime.

On top of the Teochew mui classics, Orchid Cafe also serves quite a lot of veggies and even a salad bar for those who want to eat a bit more healthy.

Goldleaf Restaurant is supposedly the very first restaurant in Singapore to serve Taiwan porridge - since 1971! - and it's actually still around, albeit in a new location in Katong.

From 11 Mar 2019, Goldleaf will be serving a Taiwan porridge buffet. It's a little on the pricey side, but on the other hand it has over 30 dishes to choose from, which is a lot by porridge buffet standards! Try it out and tell me if it's any good.

I apologise in advance to Teochew porridge purists for including this particular Asian buffet, but I needed to include an option that will satisfy both lovers and haters of porridge buffets who have to dine together.

Spice Brasserie's Asian buffet isn't strictly a porridge buffet; it's more a "normal" buffet with a decent-sized Teochew porridge counter (12 dishes). You also get the regular hotel buffet stuff like seafood, live stations, desserts and so on. This way, both species can have a satisfying buffet meal with minimal resentment.

This one is super bo hua - eh, $50 can get you A LOT of food at a hawker centre Teochew porridge stall - but if you ever feel the need to burn a bunch of money…

Goodwood Park's Coffee Lounge is the place to be. Their Taiwan porridge buffet has been around since 1984(!) and is supposedly legendary.

Instead of the standard cheap dishes like salted egg and braised peanuts, you can get zi char-style dishes like steamed fish, stir-fried veggies/meat/prawn, and Japanese-style chilled tofu. There's also a selection of desserts more typical of hotel buffets, e.g. cakes and puddings.