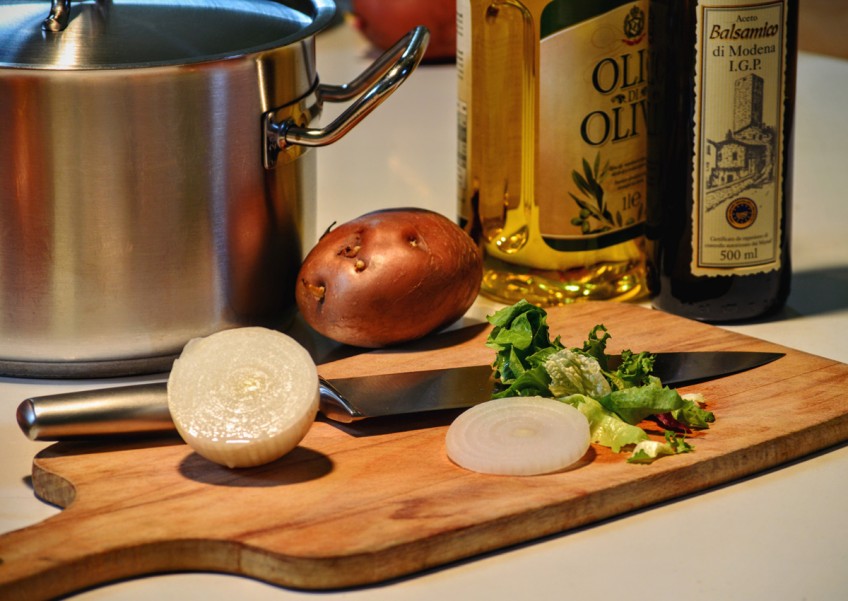 Cooking at home is one of the most obvious ways to save money and stay healthy, other than limiting yourself to only the yong tau foo stall at the hawker centre.

But groceries in Singapore are expensive due to the fact that most of it is imported. That means that you could totally eat at home every single day, and still find that you're overspending.

If that sounds like you, here are eight mistakes you could be making.

1. BUYING TOO MANY CONVENIENCE OR READY-MADE FOODS

Cooking at home is only cheap if you are actually cooking. But if all you're doing is buying convenience foods like frozen pizza, frozen lasagna or instant chicken rice and then heating them up, you're going to spend significantly more than if you just ate at a hawker centre.

What's more, convenience foods aren't exactly the healthiest thing you could be eating, if that matters to you.

One of the biggest advantages of eating at home is that you can control how much crap you're putting into your body. But that advantage is somewhat negated if you're blowing your grocery budget on snacks and junk food.

A bag of chips every now and then is fine, but if your shopping cart looks like it just came out of Candy Empire, you need to stop. What's more, as junk food doesn't constitute an actual meal (at least, we hope not), you'll still need to spend money on your actual food.

3. BUYING MORE THAN YOU CAN FINISH

Yes, we understand that as a busy professional you can't exactly spend two hours at the supermarket every day. But avoid buying so much that you consistently fail to finish what's in the fridge before it all rots or expires.

If you really can't make more frequent trips to the supermarket, change your diet to include more food that takes as longer time to go bad, such as lentils or quinoa.

If you're eating meat every day, you're eating too much meat-and also spending more than you need to. Meat tends to be relatively expensive. What's more, humans are eating way more meat than we used to, and it's not exactly doing our health or the environment any favours.

Simply cutting down on the number of times a week you eat meat will definitely lower your grocery bill.

Insisting on maintaining a 100 per cent organic diet is going to be very expensive. Do some research on the foods that are best bought organic, and which ones aren't as affected by their non-organic origins.

For instance, fruit and vegetables with very thin skins, or whose skin is normally eaten, are best bought organic, while those with tougher skin, shells or husks, or skin that's usually peeled and discarded aren't as affected by the presence of pesticides.

And think twice before you jump on health food bandwagons-just because you're spending $50 a week on the latest superfood doesn't mean your body will instantly become invincible.

6. YOU ARE BEING TOO AMBITIONS WITH YOUR RECIPES

Open any cookbook that looks like it belongs on a stylish coffee table, and you'll notice that the ingredient lists are about 10 miles long. That's because nobody is going to pay a cookbook author to tell you to fry something in soy sauce.

If you find cooking a pain and are buying tons of groceries so you can whip up elaborate recipes, you're giving yourself too much trouble.

The secret to cooking consistently and cheaply is to whip up simple stuff that doesn't take you hours or ten thousand ingredients. If you're a noob in the kitchen, ditch the cookbooks and watch YouTube videos like Brothers Green Eats instead.

7. YOU ARE NOT COMPARISON SHOPPPING

You should not be rocking up to the first supermarket you see and plucking the first packet of pasta/bottle of oil/carton of milk that jumps out at you.

Supermarkets arrange their products in a way that maximises profits and relies on customers who don't bother to comparison shop.

So make sure you check the more inconveniently-placed shelves-above or below eye level-as that's usually where the cheaper products are.

8. YOU ARE SHOPPING AT THE WRONG SUPERMARKET

The price difference between a basket of groceries purchased at NTUC FairPrice can be very different from the exact same basket when purchased at Cold Storage.

Avoid "premium" supermarkets or more atas brands like Market Place by Jasons if you want to save money.

Or if you really need those premium items, make sure you apply for the best credit cards for grocery shopping first.

How often do you cook at home? Tell us in the comments!