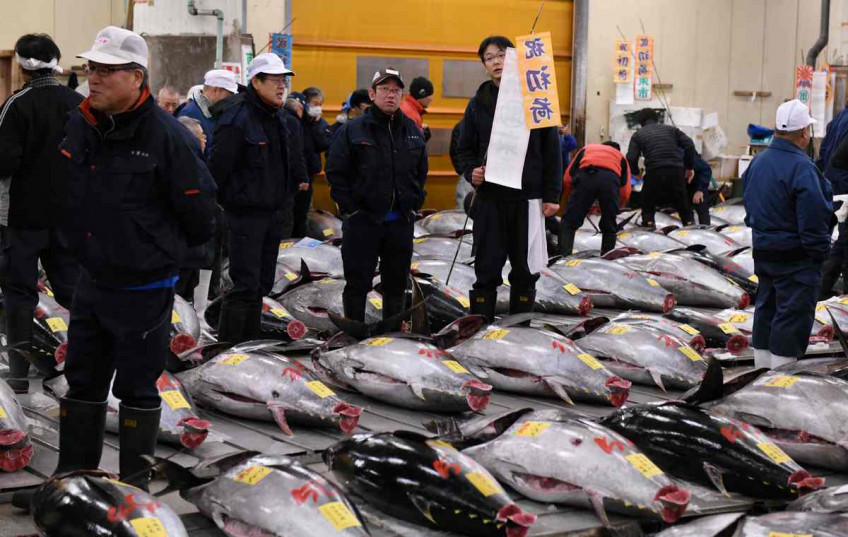 After more than 80 years in operation Tsukiji, the world's largest fish market and a popular tourist attraction in an area packed with restaurants and shops, will move east to Toyosu, the site of a former gas plant.

The market, which opened in 1935, is best known for its pre-dawn daily auctions of tuna, caught from around the world, for use by everyone from top Michelin-star sushi chefs to ordinary grocery stores.

The lively tuna auctions are considered a must-see for visitors to the Japanese capital - despite starting at 5:30am - and daily tourist numbers are capped at 120 people.

The early hour does not seem to put off the tourist crowds and "some tourists start lining up at around 2am", the spokeswoman from the Tokyo metropolitan government told Agence France-Presse.

But access to the tuna auction will end on Sept 15, as preparatory work for the move gets underway, she added.

Viewing wholesale markets for marine products and vegetables will end on Sept 29, before the complete Tsukiji market closure on Oct 6, she said.

"In Toyosu, too, we plan to open a deck for visitors, and also there will be a special aisle for viewers where tourists will be able to watch the tuna auction through a glass wall," the Tokyo spokeswoman said.

The Tsukiji market handles 480 kinds of seafood worth US$14 million (S$19 million) daily - as well as 270 types of fruits and vegetables - and has fed Japan's hunger for fresh seafood since its opening.

But in recent years the antiquated facility has prompted users to voice concerns about its earthquake resistance, sanitation and fire safety, among others.

Plans to move Tsukiji were originally scheduled for 2016, but several delays have set back the timeline, including the discovery of soil contamination at Toyosu.

Tsukiji will be transformed into a transport hub during the 2020 Olympics in Tokyo, with its long-term future still up in the air.