Some KFC stores to close all week in UK chicken crisis

LONDON - Some KFC outlets in Britain are to remain shut for the rest of the week, the fast-food operator said Tuesday (Feb 20) as a supply crisis rumbled on, leaving fans craving a fix of deep-fried chicken.

About 450 of the chain's 900 outlets remained closed late Tuesday after "operational issues" with new German delivery supplier DHL left them without poultry supplies.

"Each day more deliveries are being made," said a spokesman for KFC.

"However, we expect the disruption to some restaurants to continue over the remainder of the week, meaning some will be closed and others operating with a reduced menu or shortened hours." 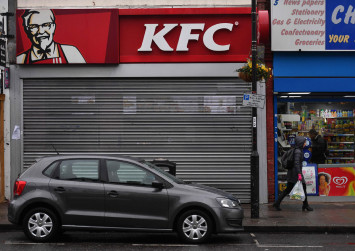 The crisis erupted over the weekend when KFC switched its delivery contract to DHL, leading to the closure of 700 of its British stores.

"We've brought a new delivery partner onboard, but they've had a couple of teething problems - getting fresh chicken out to 900 restaurants across the country is pretty complex," KFC said.

"We know that this might have inconvenienced some of you over the last few days, and disappointed you when you wanted your fried chicken fix," the company added.

With some customers apparently suffering withdrawal symptoms, one London police department tweeted: "Please do not contact us about the KFC crisis - it is not a police matter if your favourite eatery is not serving the menu that you desire."

DHL's managing director of retail, John Boulter, said the delivery firm was working to "return to normal service levels as soon as possible.

"The reasons for this unforeseen interruption of this complex service are being worked on," he added, although did not give the exact reason for the problem.

"We are committed to step-by-step improvements to allow KFC to reopen its stores over the coming days."