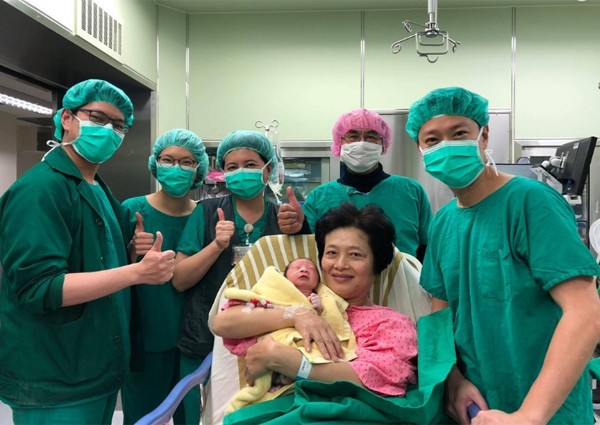 It's easy to mistake the newborn in Madam Wu's arms for her grandson, but the 62-year-old retiree had actually given birth to him on Feb 25.

The 2.93kg baby boy was born in a Taipei hospital and shares a birthday with a sister who is 36 years his senior.

This makes Wu the oldest mum to deliver a baby in the country, Apple Daily Taiwan reported.

And her family couldn't be happier to welcome their newest member.

Wu's husband said they often felt lonely after their daughter got married. So the couple decided to try for a second child while they're financially stable and in good health.

Their son was conceived via assisted reproductive treatment and delivered naturally after just 66 minutes of labour.

At a press conference on Wednesday (March 7), Dr Hsiao, Wu's attending obstetrician at Taipei Chang Gung Memorial Hospital said that it was a high-risk pregnancy given her advanced age.

29 weeks into her pregnancy, Wu developed gestational hypertension and diabetes. She also had a low placenta and her foetus' position was abnormal.

Dr Hsiao said that pregnant women who are 35 and older are twice as likely to experience complications such as premature births, delayed foetal development, and stillbirths.

He also advised older mums to closely monitor their pregnancies with advice from medical professionals.

The oldest person to give birth is a woman from India who delivered a baby via Cesarean section at the age of 72.