Babies' brain development may not depend on sleeping through the night

Infants who don't sleep through the night don't seem to be at higher risk for cognitive or motor development problems, a Canadian study suggests.

Deciding when or whether to train infants to sleep through the night is one of the most fraught issues new parents face, with some previous research suggesting that insufficient sleep may lead to a range of developmental problems for babies. Less is known, however, about whether babies' development is influenced by how many of their sleeping hours occur in a long uninterrupted stretch overnight.

For the current study, researchers examined data on 388 mother-baby pairs, asking women about their own moods and their babies' sleeping routines and assessing infants' cognitive and motor development when the babies were 6, 12 and 36 months old.

"We found that a high percentage of 6- and 12-month-old infants do not sleep through the night and that it was not associated with infant development or mother's mood," said study leader Marie-Helene Pennestri of McGill University in Montreal and the Riviere-des-Prairies mental health hospital.

"Therefore, parents should not worry if their infant does not sleep through the night by 6 months of age," Pennestri said by email. 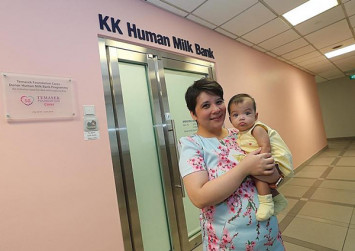 Babies in the study were classified as sleeping through the night when they got at least six hours of uninterrupted rest.

At age 6 months, about 62 per cent of mothers reported that their babies slept at least six hours a night. Girls were more likely to do this than boys; 70 per cent of girls slept through the night compared with 56 per cent of boys.

At this age, only 43 per cent of mothers reported that their babies slept at least eight hours a night. While girls were slightly more likely than boys to do this, the difference was small and might have been due to chance.

Breastfeeding was associated with lower odds of sleeping through the night, the study also found. About 55 per cent of babies who slept six hours a night at age 6 months were breastfed, while 81 per cent of infants who didn't sleep for six uninterrupted hours were breastfed.

And roughly 49 per cent of babies who slept eight hours a night at this age were breastfed, compared with 77 per cent of infants who didn't sleep that long.

Pediatricians recommend that mothers exclusively breastfeed infants until they're at least six months old because it can bolster babies' immune systems and reduce their risk of ear and respiratory infections, sudden infant death syndrome, allergies, obesity and diabetes.

By age 12 months, 72 per cent of babies slept at least six hours and 57 per cent slept at least eight hours a night. Less sleep at night was again associated with a higher likelihood of continued breastfeeding at this age.

While the benefits of breastfeeding are well-established, skipping a nighttime feeding in favour of encouraging more sleep at night for babies and mothers may not be harmful, the study authors conclude in Pediatrics.

The study wasn't designed to prove whether or how uninterrupted sleep might directly impact breastfeeding habits, child development or maternal mood. Researchers also relied on surveying mothers about infant sleep instead of monitoring the infants' sleep directly.

Sleep, while important, also isn't the only thing that influences child development, said Jodi Mindell, associate director of the Sleep Center at Children's Hospital of Philadelphia and a professor at Saint Joseph's University.

"There are so many things that affect long-term development, such as genetics, nutrition and parent-child interactions," Mindell, who co-authored a commentary on the study, said by email.

Some parents may still want to train babies to sleep through the night because this can help the whole family get more rest on a regular basis, Mindell said.

"Sleep training is not expected to lead to a baby being smarter years later nor is that the goal," Mindell said. "Studies have very consistently found that sleep training leads to happier and less stressed families."