Is being in a bad marriage literally bad for your health?

Fighting with your partner can often leave you both feeling terrible - you'll end up in a bad mood and refuse to speak to each other for hours or even days. But it turns out that her making you sleep on the couch isn't the worst thing that could be happening as a result of a fight.

According to The Guardian, scientists have found that being in a bad marriage may actually affect your health negatively. Studies by the University of Nevada and University of Michigan have shown that married couples who fought over things like money and children actually experienced worse health than before.

Apparently, not only did participants experience complications like inflammation and increased stress hormone release, men tended to fare worse than women.

"Experiencing a great deal of conflict in a relationship is very damaging to health, as are negative health behaviours like smoking and drinking," explained Rosie Shrout, who presented the preliminary results at the International Association for Relationship Research conference in Colorado. 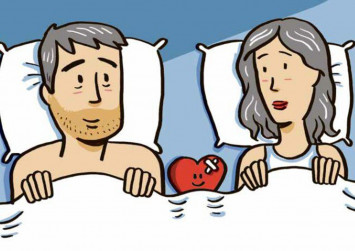 But interestingly enough, if you're in a happy marriage, chances are you'll live longer compared to those who have never been or are divorced.

"They have better psychological well-being, they are less likely to develop illnesses, and they heal faster when they are sick," Shrout said.

The scarier bit, however, is that having your health impacted can lead to long-lasting damage according to Veronica Lamarche, a professor of social psychology at the University of Essex who was not involved in the study.

"There's quite a bit of research linking relationship conflict to different types of physiological responses, such as increased release of stress hormones, inflammation, changes in appetite regulation, and immune functioning," she said.

"It isn't the case that a single fight in a relationship will irreparably harm your health, but frequent fighting over many years will take a toll - it's important to work on communicating with each other effectively to help minimise conflict."

So the next time you and your wife are about to get into a fight over something dumb, remember it's your health, and her's, at stake.

This article was first published on Men's Health Singapore