Xinhua said on Wednesday further investigations found that the company had produced an additional substandard batch of DPT vaccines, raising the total to 499,800 doses.

"Any violations of the law or regulations by (the company) and personnel will be severely punished. Local authorities as well as departments with supervisory responsibilities will also be held accountable for any dereliction of duty found," Xinhua said.

Changsheng did not immediately respond to a request for comment.

Xinhua said the investigation team discovered the first batch of 252,600 DPT doses was sold in the coastal province of Shandong. 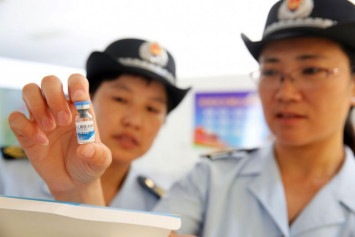 Less than a tenth of the second batch of 247,200 doses was sold in the eastern province of Anhui, with the remainder sold in Shandong.

Xinhua said about 76 per cent of the children affected by the first batch had been treated, and plans were in place to treat children inoculated with the second batch of DPT vaccines.

China began spot checks of vaccine makers in a bid to rein in public anger after Changsheng was found to have falsified data for a rabies vaccine and manufactured the ineffective vaccine for Chinese babies.

The government has ordered the arrest of 18 people at the company, which is based in the northeastern Chinese city of Changchun and the shares of its controlling shareholder have been frozen.