Evening workouts may be best for men with high blood pressure

Men being treated for hypertension may find that exercising at night, rather than in the morning, helps reduce their blood pressure readings, a small experiment suggests.

Researchers randomly assigned 50 men with hypertension, or high blood pressure, to one of three exercise regimens: cycling three times weekly for 45 minutes between 7 a.m. and 9 a.m., or doing the same between 6 p.m. and 8 p.m., or stretching three times weekly in the morning or evening for 30 minutes. After 10 weeks, researchers found that only evening workouts were associated with meaningful reductions in blood pressure.

While exercise wouldn't necessarily replace medication to manage high blood pressure, these results suggest that men who do work out should try to do it at night, said senior study author Claudia Forjaz of the University of Sao Paulo in Brazil.

"They should choose to do aerobic training in the evening to have greater and faster results," Forjaz said by email. 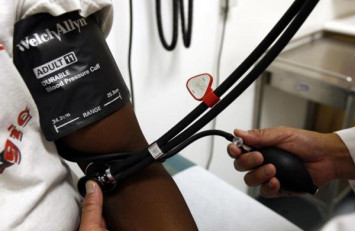 Morning workouts are still better than none at all, Forjaz added.

"If they only have the morning for exercising, they will also have the benefits, but it may take longer," Forjaz said.

Hypertension affects roughly one billion people worldwide and is responsible for 8 million deaths a year, mostly from cardiovascular causes like heart attacks and strokes, the researchers note in Medicine & Science in Sports & Exercise.

Men in the study were typically in their early 50s and overweight. Many were taking one or more medications to manage their hypertension.

It's not clear if the results from this study of men would also hold true for women, the study authors note. Because the only exercise tested was cycling, it's also possible that results might be different for other types of aerobic exercise.

"While the results of this study suggest that the time of day of performing exercise may play a role in determining long-term outcomes, at present the best advice for people with hypertension is that their focus should be on doing exercise regularly rather than on when they do it," David Hill, a researcher at the University of North Texas in Denton who wasn't involved in the study, said by email.

Still, the results offer fresh evidence of the benefits of evening workouts, said Gladys Pearson, a researcher at Manchester Metropolitan University in the UK who wasn't involved in the study.

"When exercising in the evening, there is a greater decrease in blood pressure . . . compared to the blood pressure decrease that is experienced (for the same exercise intensity) in the morning," Pearson said by email.