Prior dengue infection may protect against Zika: study

CHICAGO - Prior infection with dengue, a mosquito-borne disease that infects nearly 400 million people a year, could reduce the risk of contracting Zika nearly by half, US and Brazilian researchers reported on Thursday.

The finding, published in the journal Science, could have implications for approved and experimental dengue vaccines by Sanofi, Takeda Pharmaceutical, Merck & Co and Brazil's Butantan Institute, they said.

It was based on tests of blood samples from a long-running study of nearly 1,500 women in Salvador, a city in northeast Brazil that was hard hit by the Zika epidemic that began in 2015.

Dengue and Zika are closely related diseases. Scientists have linked Zika infection during pregnancy with severe birth defects, including microcephaly, which is marked by small head size. 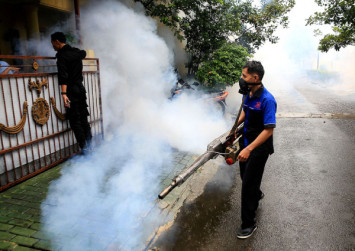 Overall, the study found that Zika affected 73 per cent of study participants, and the high infection rate in this corner of Brazil explains the high numbers of infants later born with microcephaly, said Albert Ko of the Yale School of Public Health, one of the study's lead authors.

Women in this study who had previously been exposed to dengue, however, were less likely to get Zika.

"If you have high anti-dengue antibody levels, you can reduce your odds to become infected by almost half," Dr. Ernesto Marques, an infectious disease specialist at the University of Pittsburgh and Fundação Oswaldo Cruz in Brazil, said in a telephone interview.

Marques developed a test that allowed researchers to distinguish between dengue and Zika infections. He said more study is needed to understand whether new dengue vaccines could also protect against Zika.

Takeda last month released positive results of its dengue vaccine called TAK-003, showing it prevented dengue fever caused by any of the four types of dengue. Full phase 3 results are expected in the next few months.

If licensed, TAK-003 would be the world's second dengue vaccine, behind Sanofi's Dengvaxia, which was first licensed in 2015. Rollout of that vaccine has stalled because it can increase the risk of severe dengue in some people who had never previously been infected.

Brazil's non-profit Butantan Institute is in late-stage trails with a different dengue vaccine developed by the US National Institutes of Health for use in Brazil. Merck, which has licensed that vaccine for use outside of Brazil, is in the early stages of clinical testing.