Too much toddler screen time tied to worse social, motor skills by kindergarten

Toddlers who spend too much time in front of televisions, tablets, and smartphones may not become as skilled at problem-solving, communication and other skills needed for school as their peers who have less screen time, a new study suggests.

Children in the study had an average of 17 hours of screen time a week when they were two years old, and 25 hours a week by the time they were three. This far exceeds one-hour daily limit recommended by the American Academy of Pediatrics to allow children enough time for creative play and interactions with caregivers and peers.

"Screen time is most often a sedentary or passive behaviour, with very few learning opportunities," said lead study author Sheri Madigan of the University of Calgary and the Alberta Children's Hospital Research Institute in Canada.

Part of the problem is that toddlers' brains aren't developed enough to apply things they learn from two-dimensional screens to what they experience in three-dimensional life, Madigan said by email.

"If they see someone building blocks on the screen, this doesn't help them build blocks in real life," Madigan said.

Another reason screen time can slow development is that the hours passed in front of televisions and tablets mean kids may miss out on chances to scribble with crayons or play games that help them learn how to kick a ball or take turns.

"These are critical skills in early childhood, because mastery of skill is needed before further development can occur," Madigan said. "You need to walk before you can run, and you need to know how to hold a crayon before you can write your name."

The same pattern was seen for three-year-olds. The more screen time they had, the poorer they scored on developmental tests when they reached age five.

For the study, published in JAMA Pediatrics, researchers surveyed 2,441 mothers in Canada about how much time their kids spent on typical weekdays and weekends watching television, movies or videos; playing video games; or using computers, tablets or other devices like smartphones.

Mothers also completed questionnaires about children's progress with a range of developmental milestones during the course of the study.

The study wasn't a controlled experiment designed to prove whether or how screen time early in childhood might directly impact development outcomes later in childhood.

Still, it adds to a growing body of evidence linking limited screen time to better cognitive, physical and psychological development in early childhood, said Gary Goldfield, a researcher at the University of Ottawa who wasn't involved in the study.

"The majority of children of all ages exceed the screen time recommendations, so parents have to be more strict setting healthy limits," Goldfield said by email. 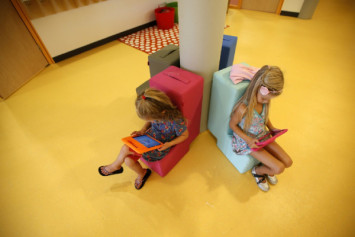 "For those exceeding guidelines, parents can buffer some of the negative effects of screen time by ensuring it does not interfere with adequate sleep (which it often does in older children and youth), daily physical activity or active play, and plenty of enriching, stimulating and positive face to face interaction with parents and caregivers, and of course other children," Goldfield added.

When kids do get screen time, it should be high-quality programming that's designed with development in mind, said Dr. Suzy Tomopoulos of Hassenfeld Children's Hospital at NYU Langone and Bellevue Hospital Center in New York City.

"Parents can minimise risks if screen time is child-appropriate, has educational content, and viewed together with the child," Tomopoulos, who wasn't involved in the study, said by email. "Parents should also turn off the television when no one is watching, during mealtimes and one hour before bedtime."