'100% handmade': Ex-commando makes intricate miniatures that can pass off as the real deal

They say you can take a man out of the army, but you can't take the army out of a man.

Former commando Wilfred Cheah creates intricate three-dimensional miniatures so detailed that some Facebook followers have been fooled, thinking it is the real thing.

"If the thing doesn't pass (my standards), I will throw away and re-do," the 55-year-old miniature artist said, crediting the high standards and discipline to his army days.

"When you focus on something," his voice deepened, "you give a deadline to complete and then achieve it". He has led two battalions as a regimental sergeant major.

When you enter Wilfred's home, one of the first things you'd notice – besides his Peranakan-inspired home with ornate tiles – is a miniature version of himself as a commando.

With the trademark red beret, camouflage green uniform and M203 grenade launcher made with exacting detail, one can understand the time, effort and skill he puts into his miniature artwork.

As you walk into the kitchen, hanging on the left wall are artfully framed photographs that reflect the deep love he has for his family.

On the edge of the kitchen island, near the windows, you can see his almost makeshift workspace that's neither tidy not extraordinarily messy. He sits there toiling over his artwork from 8am till 8pm like clockwork, according to his wife Gena Tan.

"I prefer natural light," he said, adding how artificial light is not the same when viewing his artwork. The morning sun gently embraces his plants on his mini-balcony by the window, with an aquarium-like water feature providing a calming backdrop to our conversation.

During their courtship days, financial planner Gena shared that Wilfred would make a pop-up Valentine's Day card from scratch.

And she knew he was really good at his craft when he created miniature rifles using cardboard. Some suggested they take down Facebook photographs of these miniatures. She laughed: "People said, 'It's not right, I think it's a real gun'."

These were hints of his artistic ability and in 1993, he left the Singapore Armed Forces after a decade, making the switch to be an interior designer.

Though Wilfred was not formally trained, he taught himself by learning from magazines, adding that when he joined an interior design company, his seniors did not teach him.

"So at night when they go home, you steal their drawing (to see)," he said, "that's how I learned".

And he has designed it all, from HDB flats, to private housing and even offices. He continued in the profession for almost 30 years.

Art to Wilfred is something that is as close to reality as possible. Also, you are able to view the artwork from all angles, unlike a normal painting.

A fan of nostalgia, Wilfred likes to recreate three-dimensional scenes that evoke strong memories of a place or time. 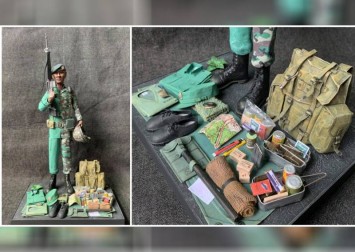 Though there are other miniature artists, he observed that many of them rely on technology and 3D printing to bring their objects to life.

He proudly declared his to be "100 per cent handmade", and added that he doesn't print or buy and would use recycled materials as far as possible.

Despite glowing tributes, he remembered one comment when he just started working on miniatures, in particular when he was creating a Peranakan shophouse. The online comment read: "Who would want to pay this kind of money to buy your cardboard? [sic]"

It was uncomfortable to hear, but Wilfred understands that as a artist, not everyone will be a fan of your work. Negative comments don't bother him anymore.

To work on his miniatures, Wilfred relies on photographs that he has seen online or from his clients.

When asked if there are any sketches or drawings, he pointed to his head and said, "it's all here". He would rely on his "photographic memory" to bring out the most intricate details of the artwork.

Then, with his interior design training, he would decide on the size and scale of the artwork and then proceed to search for the materials required.

He strives for perfection through trial and error. "Sometimes, the whole day would be wasted just testing different methods or materials to make sure I get the effect I want," he said.

Once, inspiration struck just by looking at eggs. He realised that shape and the depth of the egg shell was just perfect for miniature military helmets. Applying white glue, he was able to neatly trim the edges without it fraying to make the perfectly-shaped helmet.

This attention to detail is an important philosophy in his artwork, be it as a reflection of someone's way of life, the places they hold dear, or their reality. He said: "These experiences are what gives life to these miniatures.

The shop at Teck Ghee market

And these emotions were evident when Wilfred presented Gena's father with the miniature of Choon Kooi Provision Shop at Teck Ghee Court Market & Food Centre, where he has been running the shop for 44 years.

For Gena, the last seven years has been a difficult time for her family, after losing her brother and then her mother. Both of them were deeply involved in running the shop.

Wilfred took note of every single item of the store with the help of photographs – from all the dried goods to even the weighing machine – trying to piece together the store. The whole process took a month.

The artwork had a deeper meaning than Wilfred expected as Gena's family wanted his father to retire. He said: "If he does give up the shop, that miniature is something he can keep."

Wilfred Cheah made this amazingly detailed and life-like miniature version of Choon Kooi Provision Shop at Teck Ghee Court Market & Food Centre. It was a gift to his father-in-law, who has been running the store for 44 years. – LHL pic.twitter.com/B3zMto2edr

He felt honoured that someone of PM Lee's stature would share his creations. "It is not just an endorsement of my artwork, but a very good endorsement of a Singaporean artwork," he said.

Having since retired as an interior designer, Wilfred now wishes to slow down and spend time doing what he enjoys doing.

He shared: "It doesn't matter whether you're a bus driver, taxi driver, or if you are the CEO of a certain company.

"It's all about your heart and soul."