Getai booths pop up around the heartlands, performers in iridescent costumes singing their hearts out to a near-empty audience.

If you've lived in Singapore your whole life, you'll already know what's up.

The annual Hungry Ghost Festival has arrived, and for believers, this means the gates of hell are open for spirits to wander earth for a month.

Superstitions abound during this eerie time, and one of them is to not talk about the dead, for they are always present, and curious to know what the living thinks of them.

Yet, paranormal tales always seem to draw us in, much like how you're reading this one right now, and our need to freak ourselves out seems as spooky as the ghosts themselves.

Read Also
'Is my maid using black magic?' These stories will give you the chills! 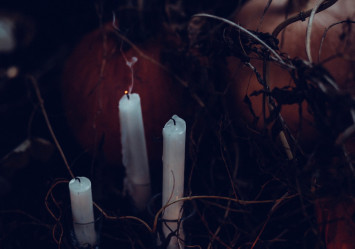 If you're interested in the dead, don't be surprised to find out that the dead are just as interested in you — especially if you work in the entertainment industry.

Anyone who has ever worked on the set of an Asian movie will tell you that there are rituals and ceremonies that precede the official filming in order to precipitate a smooth shoot.

According to one producer I spoke to, film sets are often haunted because spirits in the area are drawn to these sites of entertainment since they lead an otherwise mundane afterlife. Think about it… if you see someone filming on the streets, won't the kaypoh in you awaken as well?

So here are some chilling real-life encounters with the paranormal as told by film crew that'll be sure to give you goosebumps this lunar seventh month.

GHOSTLY KIDS AT AN ABANDONED SCHOOL IN TOA PAYOH

Nestled in the heartlands is an abandoned school near Toa Payoh Lorong 1 that's said to have made the crew of The Days, a local movie released in 2008, go through literal hell.

According to the producer, there was a particular spot on the basketball court which always caused the main actors to trip and fall, even though it was flat ground and there was nothing obstructing their path.

One night after wrapping up a long day's shoot at 4am, a team was on their way out of the school in a car when a producer noticed the gate that was left slightly ajar.

Offhandedly, he remarked: "Aiyah, if only the gate was opened a little more, then we won't have to go down (to open it)". To the horror of the other passengers, the gate started creaking open just a little wider at his words, as if someone was listening in on them.

Later, someone in the crew said to possess the "third eye" (ability to see the supernatural) revealed that the school was full of ghostly children who were making noises and running down corridors, mischievously pulling the legs of whoever walked on the basketball court.

Apparently, the crew had only been praying for blessings with red joss sticks that are reserved for deities, when they should have been using green ones meant for lesser beings.

When it comes to outdoor shoots, good weather is a must and some Asian directors employ the use of bomohs (witch doctors) and rituals to ensure it.

One such ritual (that boggles my mind) is that of skewering garlic, dried and fresh chilli on a satay stick and getting a virgin to place it in three corners of a film set.

Another supposedly involves giving exact geographical coordinates to bomohs so they can "protect" the area from rain.

Yes, we're talking longitude and latitude here, and they must be precise or the protection might cover a neighbouring village instead.

At the same abandoned school, the crew was forced to keep their equipment three times because it would rain every single time the director yelled, "action!".

Mind you, this was the last shot of the movie and everyone was fatigued and done with the weather.

Bewildered at the schizophrenic weather, the exhausted director finally realised the problem. The fault apparently lay in the location of the last shot being moved suddenly, without informing Tua Pek Kong (a Taoist deity).

"Look at it this way," the producer said. "Can you imagine asking Tua Pek Kong for permission to film in his territory, getting that permission and suddenly choose not to film there without telling him? Of course he'll be angry".

After they apologised and sought permission again, the last scene was shot without a hitch.

THE CAMERAS THAT REFUSED TO COOPERATE

Ever been told that spirits can be detected through their interference with electronic devices?

During one shoot, a new camera placed in one particular corner of a room consistently malfunctioned and would record neither picture nor sound, but would work perfectly fine when it was moved to another location. 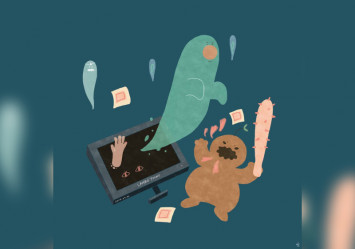 Having an inkling that something was not right, the director instructed the entire crew to pray earnestly to the four-faced god that was supposedly guarding the set and the camera was able to work again once prayers were finished.

One movie that was shot in Pulau Ubin was reportedly riddled with problems throughout the filming.

From sudden bad weather (when predictions were that it would be clear), to things going missing or lights inexplicably spoiling, it was an overall bumpy shoot. 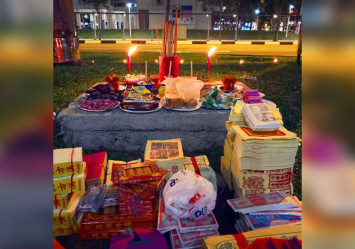 A sound guy on set who had "special" abilities asked the spirits why they were unhappy.

The reason? Unbeknownst to the crew, someone had brought canned luncheon meat made of pork onto the island which angered spirits of a Malay kampong that used to reside there.

SHE BROUGHT THE SPIRIT BACK TO SINGAPORE?!

During the filming of a 2017 local movie shot at the old Komtar theatre in Penang, a crew member with a "naturally weak aura" had a paranormal experience with a malignant wraith.

According to a producer who worked on the set, the traumatised lady was held by the throat and pinned to the toilet wall, scolded by the being for disturbing spirits on set. 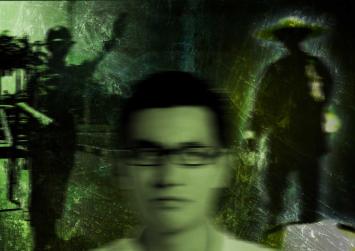 One of them later possessed her and followed the poor girl back to Singapore because an incompetent bomoh failed to cast it out of her. She later had to engage her personal bomoh to exorcise the spirit once she returned home.

The producer also added that the Komtar theatre contained many ghostly "brothers and sisters" and a caretaker resolutely told them that "die die no human being can remain in the premises after 2359".

Perhaps the caretaker wanted to get off work on time. Or maybe he had a more ominous reason for enforcing that rule.

The same producer was told that some poor fella had accidentally fallen into the orchestra pit and died suddenly, unable to attain peace in the afterlife.

It's said that till this day, if you listen carefully beneath the theatre floors, you might be able to hear the tinkling of bells.