5 things you didn't know about the Hermes Birkin

What's the deal with the Hermes Birkin bag? Well, it's not only one of the priciest bags in the world, but also one of the hardest to get.

In fact, it was used as a gauge to attest to the wealth of Rosmah Mansor, the wife of former Malaysian Prime Minister Najib Razak.

When a photo of Najib's aides loading a total of 284 boxes containing luxury handbags - including dozens and dozens of orange boxes holding Hermes Birkin bags - into trucks was circulated online, it caused widespread anger.

Many believed that she had misappropriated government funds to support her hobby. After all, the bags were known for its hefty price tag of more than $10,000.

A recent New York Times article (May 15), however, quoted a broker who estimated that the value of her Hermes Birkin handbag collection was worth at least US$10 million.

Here are five things to know about the handbags, among the most highly coveted items in the luxury fashion world.

1. YOU CAN'T JUST WALK INTO A HERMES STORE AND BUY THEM

Only a few pieces of Birkin bags are produced annually and there is no fixed schedule as to when they are sent to the stores.

The waiting list to buy one is long, reportedly up to six years and new bags cost anything from $16,000 to $268,600, depending on the rarity of the crocodile skin and embellishments that could include gold buckles and diamond studs.

The alternative is to buy them off the secondary market and auction houses, where they are even pricier because of the bag's high investment value.

The Hermès 35cm Himalayan Birkin is crafted from Niloticus crocodile hide. The designation ‘Himalayan’ does not apply to the origin of the bag, but rather to the delicate gradation of the color. The smokey gray fades into a pearly white, resembling the majestic, snow-capped Himalayan mountains. The process of dying a crocodile hide is time-consuming and exponentially more difficult as the shades lighten — to create the immaculate white of the snow and the gradation to rocky gray requires great skill and a fine eye. The finished product is wondrous to behold. Available for immediate purchase. #hermes #himalayan #priveporter #birkinhimalayan #birkincrocodile #birkinhimalaya #himalayabirkin #himalayanbirkin #birkin35 #b35 #nuage #luxury #fashion #hermeslover #potd #love #shopping #lifestyle

So what's the big deal about these bags? Fans rave about the blemish-free quality of the leather, the gleam of the hardware and the meticulous construction.

They also come in many colours and sizes, and hold their value. And, of course, the status attached to being able to afford - or be gifted - such a luxury. 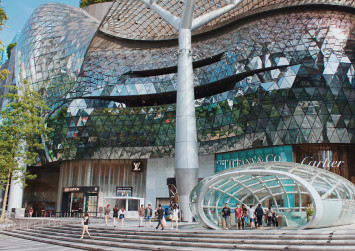 A diamond-encrusted Niloticus Crocodile Himalaya Birkin 30 was auctioned off at HK$2.98 million (S$510,000) at Christie's late last year, making it the most expensive handbag ever sold at an auction.

The buyer was not named, but was said to be from outside of Asia.

The international head of handbags and accessories at Christie's, Mr Matthew Rubinger, told South China Morning Post that the Himalaya Birkins are coveted for their "extreme rarity, iconic status and craftsmanship".

Only one or two Himalaya Birkins are made every year.

3. THEY ARE NAMED AFTER THE BRITISH-FRENCH ICON JANE BIRKIN

In 1984, late Hermes chairman and artistic director Jean-Louis Dumas created the bag for British-French actress, singer and model Jane Birkin after she told him that she had trouble finding the ideal weekend leather bag.

In 2015, Birkin asked for her name to be removed from the bag after animal rights group People for the Ethical Treatment of Animals (Peta) alerted her to the cruel slaughtering process that crocodiles went through for the production of the bags.

She allowed Hermes to keep using the name after the company conducted an investigation and identified the cruel practices as an "isolated irregularity".

4. A SINGAPOREAN HAS ONE OF THE WORLD'S LARGEST BIRKIN BAG COLLECTIONS

?No happier colour to reflect than PINK! The Eclipse Jacket @pursebopfrocks @pursebop

Singapore socialite Jamie Chua reportedly has one of the biggest collections of Birkin bags - more than 200. The flight attendant turned skincare entrepreneur's collection is said to be worth $2.9 million and is housed in a room-sized walk-in closet.

Back in 2009, Beckham was reported to be in the proud possession of 100 Birkin bags.

5. THEY'RE NOT JUST FOR WOMEN

Another one from the LOVE BALL 3. We sure do love turning LEWKS! You know we bring it to you every ball! Photo @bfa @bartschland @cfda

According to a 2016 report by American fashion magazine W, men go for neutral colours and the larger sizes. The Birkin, it adds, is "the perfect companion for a male jet-setter".