At 60, he opened a hidden bike cafe at Seletar airport where you can eat and watch planes take off

For many of us, hitting our golden years probably means slowing down our pace of life, focusing on loved ones and contemplating whether it's time to hand over the reins and retire.

For 64-year-old Poon Kng Joo (better known as Ah Joo in the cycling community), retirement is the last thing on his agile mind.

The ambitious risk-taker is not afraid to show it, jumping headfirst into opening his own bike cafe the year he turned 60, and four years on, Soek Seng 1954 Bicycle Cafe is still going strong.

While most entrepreneurs shun the idea of setting up shop in an ulu (remote) area, Ah Joo embraced that challenge and located his cafe beside Seletar Airport, where diners can have an unparalleled view of planes taking off and landing.

Despite its far-flung location, the interior of the cafe is a breath of fresh air, with a vibrant decor that continues to draw both regulars and new faces who visit after hearing about the place through word-of-mouth.

There's also another reason why the location was picked — as an avid cyclist and two-wheeler enthusiast, Ah Joo knew the spot along a popular cycling route would be a hit among cyclists on weekends.

Stepping into the cafe, one is immediately struck by the 30-odd bicycles lining the walls, each hand-painted by Ah Joo himself.

A friend had advised him to make the decor visually stunning in order to appeal to the selfie-generation, and thanks to social media platforms like Instagram and Facebook, not much capital had to go towards advertising about the place.

"I'm a detailer, so I know exactly what I want. You can give me a rusty bucket bike and I'll turn it into a masterpiece," chimed Ah Joo.

Indeed, the man is an artist through and through. His craft saved him from despair after the passing of his brother, the late Cultural Medallion recipient and abstract sculptor Anthony Poon, from lung cancer in 2006.

Hearing him wax lyrical about bicycles, one would never realise he only started cycling properly in his fifties, after discovering his passion for it at an OCBC mass cycle event in 2008.

As a paint specialist who started off restoring vintage cars, it was only natural for him to transfer his art from four-wheels to two, and so dedicated he is to his craft, Ah Joo single-handedly restored hundreds of modern and classic bikes — those on show in the cafe are a mere fraction of his personal collection.

Not only are they pretty to look at, every single one is in perfect working condition, and is taken out on rotation by Ah Joo, whose exercise routine will put most in their twenties to shame.

In the pink of health, the sexagenarian cycles about three times a week (100km a day is normal), and at the end of this year, he intends to compete in a 900km race abroad.

Since the cafe is inspired by his love for cycling, one might think Ah Joo's menu would cater to fellow cyclists who stop to refuel and serve light snacks or healthy food like salads, smoothies or fruit bowls.

Instead, you'll find hearty comfort food and an eclectic mix of cuisines, with dishes ranging from beef rendang to vegetarian spaghetti to Japanese gyudon.

That's because Ah Joo leaves the handling of food to his brother-in-law who has experience in the F&B industry. But this does not mean the food at Soek Seng is any less spectacular than the intricate art on his bicycles.

Reasonably priced, I tried the gyudon and beef rendang, both of which had a generous meat to rice ratio and worth the effort to travel all the way down.

Although the gyudon tasted yummy, it wasn't anything to write home about. The rendang on the other hand, was a different matter — hearty and not too oily, the meat so soft and succulent it was practically falling off my fork.

Since I didn't get the chance to watch a plane take off while eating, I won't be opposed to going back to try another dish from the menu. 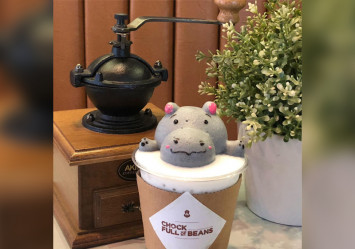 Most boutique cafes in Singapore have a limited lifespan since people stop coming once the novelty dies down, but Ah Joo says Soek Seng's quiet and relaxing atmosphere is why diners keep coming back — there's always plenty of parking space and there's no need to fight for seats.

Will the place be able to withstand the test of time and still be here in five to 10 year's time?

Ah Joo doesn't know but he sees the future as full of endless possibilities. In the meantime, he's just going to keep on cycling.